YOUTHS AS AGENTS OF SUSTAINABLE PEACE IN NIGERIA

By Eti Best Herbert 14 months ago 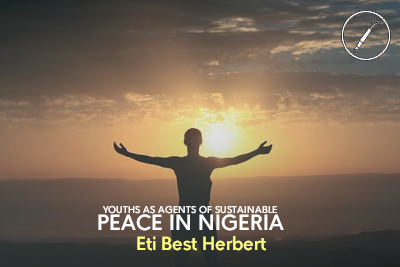 YOUTHS AS AGENTS OF SUSTAINABLE PEACE IN NIGERIA

Peace is so fundamental to the existence of a society which cannot experience social, economic and infrastructural development in its absence. It is in recognition of this fact that the United Nations Development Programme (UNDP) expressed its commitment towards the attainment of ‘peace, justice and strong institutions’ as one of its Sustainable Development Goals (SDG). Peace is not just the absence of violence (negative peace). On the other hand, positive peace is the attainment of social justice, elimination of hunger and poverty in the society. The latter portends a better view. This is because even in the absence of civil strife, some members of the society could still feel disgruntled and cheated in the absence of social justice and equality. This could lead to vices which have potentials of threatening the peace and collective existence of the society.

Nigeria is a heterogeneous society made up of people from over 300 ethnic nationalities with different languages, cultures and religions. That notwithstanding, the British Colonial government amalgamated the Northern and Southern protectorates in 1914 to form an indivisible country which outlived its independence in 1960 till present date. The differences amongst Nigerians, which ought to be a source of strength, have constantly been explored as a source of crisis and breach of peace in the country. Nigeria has barely lived through each crisis as they arise. However, the incessant disturbances have continued to weaken the fibre of unity that binds the country together. Nigeria is in frantic search for positive and sustainable peace in line with the UNDP Goals. This essay explores means of promoting sustainable peace in Nigeria, with particular emphasis on the role of the youth.

In the 58 years of Nigeria’s existence after independence, the Country has experienced lots of ethnic, religious, economic and political crisis. Prominent amongst these, was the civil war that broke out in 1967-1970. The country managed to survive it. The country also experienced several military interventions in politics which occasioned wanton abuse of human right. The return to civilian rule in 1999 was believed to retrace the steps of the country to a more peaceful coexistence amongst its citizens. However, this was never to be. Shortly after 1999, the youths of the oil-rich Niger-Delta region started agitating for resource control of the natural resources in their land. These agitations took the form of arms struggle between the youths of the region and the military; oil bunkering and destruction of oil installations; kidnapping of expatriates; political killings and other vices. Just when it was thought the Niger-Delta struggle have been resolved by the amnesty programme, the Boko Haram group began their terrorist activities in the North-Eastern Nigeria that led to massive rise of internally displaced persons in the country. The emergence of the Buhari led federal government appears to have reduced the rate of terrorist attack in the North-East. The government also clammed down on the secessionist movement by the Indigenous People of Biafra (IPOB).

Sadly, the government is yet to find an answer to the Herdsmen/Farmers clash that currently plagues the nation in the North-Central region. The desertification effect of global warming up north has led to the migration of herdsmen to the north-central in search for greener pastures to feed their animals. The herdsmen claim their grazing routes have been blocked by farmers while farmers contend that their crops have been destroyed by the herdsmen and their animals. This conflict of interest has led to arm struggle which has resulted in the loss of several lives and property and contributed to the steady increase of internally displaced persons in the country.

THE ROLE OF NIGERIAN YOUTHS AS PEACE BUILDERS

Youths are often described as young persons between the age of adolescence and maturity. It is a stage of live when one is full of energy, exuberance, yet insecurity. These characteristics could either be explored to achieve negative or positive impact depending on the kind of influence exerted. In the various instances of violence that had erupted in the country, the youth had always been the frontline actors. Most youths have allowed their peers and politicians to take advantage of their vulnerabilities to perpetrate violence and unrest in the society. Youths are mostly used for election rigging, thuggery, kidnapping and ethnic violence.

It is time for the youths to change the narratives by using their energy to build and promote peace in the society. If youths would refuse to allow themselves to be used as pawns in the hands of mischief makers the level of violence will reduce drastically. Where youths are given the opportunities, they can utilise their unique qualities for the development of the society. The lack of leadership opportunities for the youth has led to the massive campaign of “not too young to rule”. While waiting for that opportunity to rule, youths can make positive impact in the little leadership positions they occupy at the community level. Youths can volunteer as vigilante groups to secure their immediate communities from external aggression. As a way of dealing with the root cause of the Herdsmen/Farmers clash, the youths can engage in tree planting exercises especially in the far north to mitigating the effect of climate change on the environment and its consequences. The youth of this age has the advantage of access to the internet and social media. These can be used as medium to counter hate-speech, educate and sensitise people for greater understanding of our differences and tolerance. Youth can create online groups for the exchange of ideas to promote peace.

This essay examined the concept of peace and means of developing sustainable peace in Nigeria. Particular attention was paid on the role of the youth in that regard. It concludes by recognising that youths have a prominent role to play either in promoting violence or peace in the society. Hence, sustainable peace is in the hands of the youth; they can either kill in or incubate it!