Words For The School

By Daniel Chukwuebuka 15 months ago 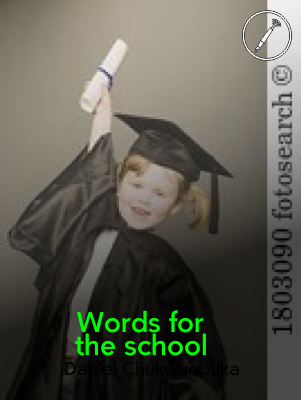 WORDS FOR THE SCHOOL: lengthy notes from teachers

The school that parents envision and think it will change things for better, starts to be that thing that threatens the students who are there to learn. School wants the best out of the students as the parents want that too. The school sees things differently by forcing rules that will compel learning into the students. Wondering what the students who never want to see the school compel things to their lives think about the school. Yes, some would say the school stands as a threat to what they want to achieve in life. The school wants the students to write notes and occupy themselves with something academic, rather than just getting home doing nothing.  It ends up not working so pleasantly for some students who may see it as a stress and time encroachment, while some students may see it as a guide to comprehend that topic that they find confusing. Although, it is the reason the teacher wrote the note so that they can have quick understanding to it. But it turns out different for some.  These students who never want to involve in such lengthy notes are mostly seen as the lazy and good-for-nothing students. This connotation is wrong for those who see it that way because it never guarantees success in life. So, why then should the students be threatened with failure that ends in school.

Days of my primary and secondary level were stressful and infuriating that my teachers felt given notes would make us stay abreast to the scheme and performed excellently in the subject.  I wondered how well I learnt those things that made me that good student I wanted them to call me. It was totally a hell out of devil himself, that with all those lengthy notes I copied in school; I cannot write a page from what I was taught now that I am done with those levels, which is too bad. My teachers bombarded us with notes that could take a whole day replicating in the name of having a complete notes.

This is not really a good method the teachers are using and it is not helping at all in any sense. They were once a student and they know what writing lengthy notes is, why should they use that same method in passing knowledge. Education is not the writing of lengthy notes and not being able to explain, but it is the acquiring of knowledge in a simplest form. A great physicist said that “if you can’t explain it simply, you don’t understand it well enough”—So, why have they decided to play with the knowledge we go to school to acquire? The reason I said nothing much when I was asked what I was being taught in school was because I never understood the pattern used by my teacher. Not that I was a dumb student for not understanding it, but because of the method my teachers used in teaching us.

Teachers, what the school have you to play is the betterment of the students to bring out as the latin word educatio means, and not full our head with” lengthy notes”. The US president, Bush said education is not the filling of one’s head but the inspiring of one’s minds.  Come on! Teachers, you have to see it that way and stop compelling the students into writing of copied notes.