What Happened In Pethuel's Room

By Ibrahim Kabiru 2 weeks ago 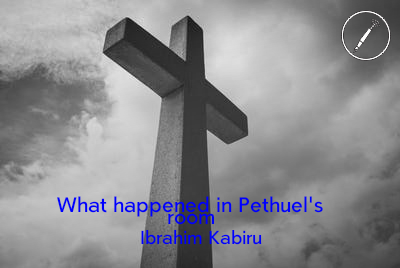 "What Happened In Pethuel's Room?"

We were four staffs working for the Oswalds Family house, they were three girls and me the only Male and the oldest  in the broad mansion.

It was Friday, and it was Christmas, the Catholic family done with their Merry, but Pethuel; the last born  was not a team player, he was alone in his room-painting, he paints evey Christmas.

Pethuel committed a crime by accident at the age eleven, the crime of murder and he did it on Christmas day, it made him mentally ill, especially on Christmas. Now he was twenty five and the worst day of his existence,  Pethuel was a good man, everybody likes his company but that fact made him his own devil.

I was standing motionless behind his open French window listening to the words he was saying to himself and the art he was working on. He kept on painting,  I never understood art, it was a waste of time and passion to me, but watching Pethuel grow to an adult with the zeal of making meaning out of a painted work make life worthwhile. I shrugged and went my way.

It was about two hours later, and the time was 12a.m, the grilling scream from Abigail; the last employed maiden awoke every living thing in the Oswalds mansion.

At the sound and rush we all head to Pethuel's room and find Pethuel lieng in the pool of his blood, Pethuel was dead, his slim fingers holding the razor to his throat.

Days gone by, Pethuel was buried with the fact of suicide,  but still the Oswalds still went for an authopsy.

Seven days after Pethuel was buried, a detective from central division came around, and I was the first person he approached, he said ''Good morning Sir,  my name is Detective John Maxwell from central, I figure you are the eldest around here''

''Tell me Sir, what happened to Pethuel, everything from day one''

I smiled lightly, ''That's not the question to ask, what you need to ask is what happened in Pethuel's room''

Everything seemed clear to me after Pethuel was put beneath, ''Nobody knew what he was going through all his life after he killed his twin on Christmas, he thought it proper to also die by the razor on Christmas. The night he died I saw him painting and talking to himself,  but I later find that he was talking to the painting whom he sees as his brother.''

''But why so'' Maxwell said inquiring

''Pethuel had mental depression after he killed his twin, inside his head the painting talks to him, and that day it must have told him to make do with the razor, so he ended the depression I guess''

Maxwell nodded thoughtfully, ''But what do you think Sir''

''I think no child should be let alone in the name of prestige or so, if Pethuel was given attention and care life would have meant fixing not blaming, he would have looked life like a gift not a curse.''

''He must have thought it alright to die, don't you know? death is the only thing you haven't try''