By Okolo Chinua 17 months ago 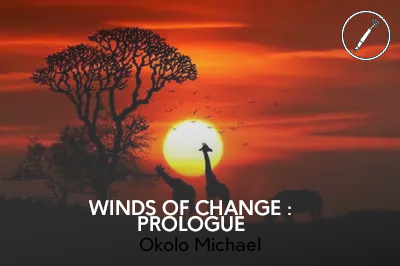 The night was cold and chilly. The breeze blew softly, caressing the bodies of the people outside. Adults were seen making merry and children were dancing. It looked like man was just told that Amadioha was coming to see them,everybody was drunk with joy. Nwokoro sat in his obi, looking outside and observing the environment, in his hands he held a horn with fresh palm wine in it. He breathed aloud and thought to himself, “who would have thought that this same people jubilating had once accepted the wrong way of things. Now they were free, free from the white man and his people, free to establish their own government without the white man`s influence.” The evil stench of the white man still lingered in his mind. He exhaled, rested his back on his mat. The people were celebrating the tenth anniversary of their independence. The village, Umuoba had not known peace since the advent of the white man. It was indeed a thing of joy whenever they remembered that day. Omekannaya, Nwokoro's son came out of his mother's hut to meet his father. ”Nna anyi, ndeewo” he greeted in his native tongue. His father looked up and smiled. Omekannaya was a boy of seven years but he was already taking charge like an adult. This pleased his father. His father said to him “my son, you are welcome, I expected you to be asleep or better still outside with your friends, why have you chosen to be here instead?” Omekannaya replied his father, “Indeed father, I went out to play however at a point, I heard two adults discussing about how this independence came to be and it dawned on me that I had no knowledge of how things were before now. Please father, if it pleases you, I will like to know how it all began”. Nwokoro smiled. Indeed he was not surprised, his son's exuberance reminded him of his father who he had so much admired. “Very well, our people say that the words of the elders are the words of wisdom, the white man heard it and became wiser. It is always good for a man to trace his roots. Sit down my son, I will tell you how it all started. It all began with my father Okoro…”