WHY THE HEATHENS RAGE

By Chinomso Anyim 15 months ago 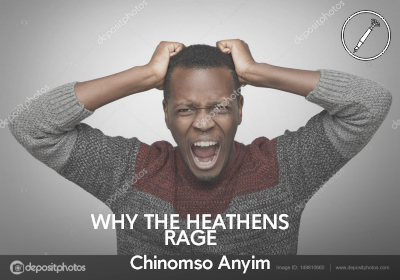 Annabel 26, 5 feet tall with dark long wool-like hair, a silky soft skin and a pair of bright twinkling eyes that are impossible not to notice, got a job as a personal assistant to a handsome man in his early forties.

Annabel is a natural beauty. She does not need any make up for people to accept she is beautiful. Catch her off guard in the morning when she is straight from the bed and you will realise that Elohim the creator spent a bit more of His time when He moulded her.

Luscious her immediate boss, though married, is an unrepentant womaniser who would stop at nothing till he has his way with any lady that he sets his interest on.

From the very first day Annabel resumed, Luscious her boss had his eyes set on her. He started with small harmless complements about her physical looks and then went on to how intelligent she is and how he is so impressed with her work. As days gave birth to weeks and weeks to months, Luscious began to offer her lifts on her way home after work. He would buy her little gifts like a lunch pack during break time and some chocolates on their way home.

On her birthday, he decided it was time to up his game by buying something more expensive. So he bought her an iPad and added a red rose flower and a card that has a suggestive romantic inscription. He then goes further to invite her for a private dinner to celebrate her birthday. Annabel now realising that her boss is on a mission becomes uncomfortable and turns down his invitation.