WHY THE HEATHENS RAGE 2

By Chinomso Anyim 16 months ago 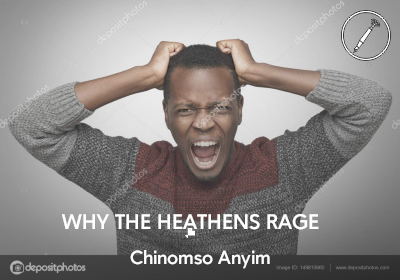 He is not happy about that but he takes it as “playing hard to get” and begins to device all manner of wooing tactics to win her over but Annabel stood her ground defying all of his every whim and caprice. He promised her a life of “El Dorado” with promotions and increase in pay only if she consents to his overtures but Annabel replied I am born again sir; it is against my belief to frolic with men.

One day, after several futile attempts to make Annabel give in, he reminded her of the day she came late to work and signed an earlier time on the attendance register, he rubbed it into her face that she wasn’t a saint after all. He told her how he had been with several “church girls” like her and that didn’t stop them from attending church, so she should stop pretending because she is not Mary the mother of Jesus. By the way, he added, even virgin Mary got pregnant out of wedlock.

Still not giving in to his blasphemy and slander, Luscious became frustrated and began to find faults in her work submissions. He started complaining of too much typographical error in her submissions and on one occassion, he threw some printouts to her face.

He accused her of not meeting up with her work targets and deadlines.

He complained that her dressing is no longer appealing to the eyes.

He issued her with query for late coming and even threatened to sack her.

He eventually appraised her poorly in her work ratings which eventually culminated into a suspension.

While on suspension, Luscious began to plot and scheme on how he would travel with her on a business trip and there let her know he could do more than have her suspended if she would not dance to his music.

If she still refuses, he would set her up and blackmail her until she submits her pride.

His final onslaught will be to plot the termination of her appointment, if she still does not shift grounds.

It is Saturday a cool windy night. The moon is peeping down through the clouds as Annabel irons her clothes in preparation for Sunday service. It has been a busy day. From the very moment she woke up in the morning, she went from doing one domestic chore to another. She sang while ironing as she always does. She hissed and sighed severally in between her singing as her mind drifted away into the incidence in her office the previous day. The words “Annabel, you are hereby suspended for one month with a 30% cut in your salary” kept re-echoing in her ears.

She breathed down heavily heaving a sigh of relief as she thought aloud “at least am going to have a month’s rest from the hustle and bustle of Lagos” but a dissenting voice in her told her that she is tolerating injustice.

"What an inspiring message. Pastor’s message today was especially for me" Annabel told herself as she walked to the fridge to take a cold drink ruminating over the message “Why The Heathens Rage” from Psalm 2:1-12. The climax of the message for her is drawn from verses 7, 8 and 9.

The heathens rage because the sons of God refuse to do two things, her pastor said.

1. They refuse to declare

2. They refuse to ask

They refuse to make declaration over the heathens and they refuse to ask of the Lord – their heavenly father.

That very same moment, like a bolt from the blues, it dawned on her that she had been pushed to the wall by her boss because she allowed it. She immediately jumped up from her sitting position and with the anger of a wounded lion, she shouted "NO! I refuse to take this. I declare an end to the rage and imaginations of the heathen over my life.

I am a daughter of the most high, the earth is the Lord’s and its fullness thereof so father, I ask that this suspension be cancelled and my job restored.

I ask that you uncover every plot of my heathen boss and humble him to his knees in Jesus name, Amen."

Annabel immidiately felt relieved and a boundless joy surged into her heart.