By Charles Igwe 13 months ago 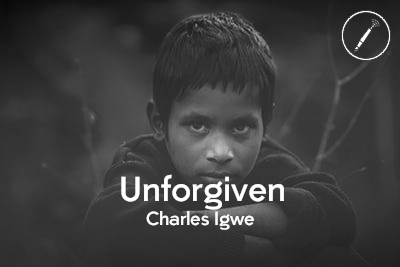 UNFORGIVEN
I believe in heaven and hell… that you may rot in hell
The night Dozie died was one of the happiest and memorable nights in your life. It was 27 May, 1999. You were not happy because Dozie had died; it made no difference to you whether he was dead or alive. You were in fact happy because it was the night Ole Gunner Solksjaer nicknamed ‘The Baby face assassin’ delivered the UEFA Champions league trophy to Manchester United with a crucial injury time winner. It was one of the greatest football story ever told as it was the first time a European Club had ever clinched the treble. Thus, for all who were frenzy with joy that night, Dozie’s demise was one of the most insignificant events; a trickle of sand in the multitude of an ocean. You had thrown a huge party for your family and handed your first son, a Manchester United jersey with the name ‘CANTONA’ boldly printed at its back. As preparations were being made for Dozie’s corpse to be taken to Achi-Joint mortuary, Ugwuoba; the hospital attendants were desperately trying to console Nne Dozie. She was wailing uncontrollably where as you were already sound asleep or at least making efforts to sleep. Your legs intentionally outstretched to reach your wife’s thigh, so you could have the ‘good feeling’.
Dozie had been dead for over eight hours, but it was only at dawn when your juicy sleep was broken by Ikeme’s telephone call that you heard the news. You had received the call and the moment Ikeme spoke you had a premonition of something gone wrong. He proceeded to break the news of Dozie’s death to you. Despite his efforts to talk coherently, you knew he was trying hard with little success to suppress the tone of grief in his voice. His final words before hanging up struck you. “Obiora, you could have helped him, you should have saved his life.” You could not believe your ears, was Ikeme trying to blame you for Dozie’s death. You did not murder him; you could not kill a man who was already dead; dead to you.
The days prior to Dozie’s funeral were of great psychological torture to you. You felt obliged to visit the family; at least for the sake of his mother who was extremely kind to you. It had been nearly two decades since you visited their home. Bitter-sweet reminiscences of that visit still haunted your memories. You and Dozie had just completed your O’Level examinations. To have fun, you had decided to stay with him for a week at his house. You remember how both of you danced melodiously to the tune of Shina Peters and how you laughed so hard when Dozie known for his croaky voice was trying so hard to mimick the voice of Fela in the critical acclaimed Zombie. Nonye, his younger sister had walked into the room that day and wanted you to dance to Onyeka Owenu’s ‘Ekwe.’ Dozie had boasted to his entire family that you were a great singer and terrific dancer. As much as you wanted to dance that day, you just could not do it in front of Nonye who you had developed a secret crush on. You remember her covering her face with her palms and then bursting into laughter. “Obiora onye ihere’, she said softly. “Tufiakwa, I na eme ihere ka nwanyi.”
You had all these memories because you had been a part of that family, had loved them as they had loved you, until Dozie made everything change. You wondered how Nonye would react to your visit at the funeral. Would she sheepishly run away as she had done many years ago? She had tiptoed into your room the night prior to your departure, you were surprised but when she pressed her sensual lips against yours, you were dumbfounded. You never saw her again, though you just heard she had completed her traditional marriage rites last month.
As you made up your mind to attend the funeral scheduled for the next day, you wondered if she will still remember the night she made you fall in love with her.
As you lay on your bed that night, you tried to picture Dozie lying cold, alone in the dark. You tried to bring up a question you had intentionally dodged for years; a question many people had confronted you with. Of course, gradually their interest died seeing you were in no disposition to satiate their curiosity.
“What actually went wrong between you and Dozie?”
Gradually, the memories started flooding in…