By Joy Nwankwo 18 months ago 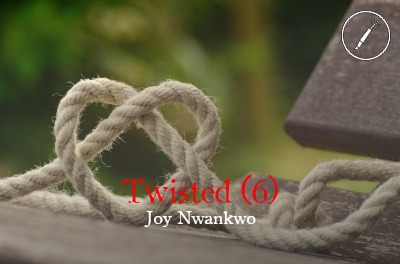 As Eunice looked at Kenneth’s smiling face, she knew what she had to do; she had to stop him from doing whatever it was he believed was going to be a pleasant surprise. While the realization of what prank he and Onyinye had cooked up was indeed a surprise, there was nothing pleasant about it.

The emotional trauma she had gone through the past hours since she got his text was not going to be absolved by the realization of the fact that it was a prank. She had cried more than she had ever thought herself capable of. She had felt so small and insignificant, and for a moment she had considered herself less than she knew she was. All because Kenneth and Onyinye thought it would be hilarious and memorable to play a prank on her. Well, she lost her sense of humour today so she couldn’t find the fun in it.

She allowed her steady gaze focus on Kenneth. She was not going to say a word; no greeting, no pitiful words, no questions on how he could play such mind game with her, and no question about how he and Onyinye had planned it without her finding out, even though she was curious on that count.

She was obviously so carried away with work that she had not noticed anything fishy about Onyinye. If she had been more conscious she would have noticed something wrong with how easily Onyinye gave up in her search for Kenneth this morning when she went looking for him to teach him a lesson for ‘breaking her heart’.

Eunice watched as the smile on Kenneth’s face slowly waned and felt pity for him. She had to tell him. The hours since her mother spoke sense to her opened her eyes to how wrong they were for each other. She had to let him go even though she knew she would miss him. She watched as he worked up his courage to speak up and she bit the insides of her cheek to stop the threatening smile. Payback was easier and sweeter than she had envisaged, but there was no time to bask in the little victory, this was no game and neither was it a battle.

“I’m sorry about the text I sent in the morning,” Kenneth began, but she raised her hand to stop his flow of words. She had to stop him before he asked her. A part of her was afraid that if he asked her to be his wife she would say yes, despite all what she realized today.

She still wanted to get married.

“There’s no need to be sorry, Kenneth. With Onyinye missing I’m guessing it was a planned move but I hope it’s not a path to a proposal from you.”

The way surprise flashed through his eyes told Eunice that she had been right.

With a deep sigh, she shook her head. “Well the Lord moves in mysterious ways. Your prank opened my eyes to many things that I had ignored, and I realized that we are not meant for each other. Kenneth, please don’t ask me to marry you.”

The last thing she saw as a waved down a Taxi was Kenneth looking at his hand fiddling with a box which most likely contained the ring. She swiftly killed the curiosity she felt to see what kind of ring he bought for her.

As the Taxi driver dropped her off at her apartment, Eunice knew there was no way she was going to sleep tonight. Thank God she had the report to edit. It was sure to be a long night.

She had ended things officially. She had her closure. Why did she still feel like crying?