By Nneji Favour Tochukwu 15 months ago 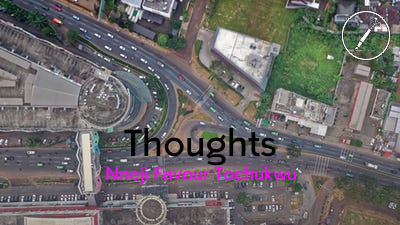 Dear Diary, a day never goes by without me considering suicide. Yes, yes, it has gotten to that point. These two thoughts keeps tearing me apart, "no! no!! you don't have to do this" (first thought). "You really need to do it to escape all these harsh treatments"(second thought). But why is he being this cruel to me? What have I done to him? How dis u wrong him? "Just drink 5 capful of Dettol n end it all and put him in great trouble by leaving a note indicating he's the cause of your death"(first thought). "Dear dear you have someone who would die if anything dares happen to you, your Aunty(second thought)".

Guys guys please let me think, I need a clear mind(me)". "Killing yourself won't solve anything dearest, you need to be alive for your Aunty and for Kweku(second thought)". "Why Kweku? He's the reason why you are like this, he's the one putting you through all these miseries(first thought)". " Yea, Kweku, you need to stay alive to prove to him that you're gonna make it outside his house"(second thought)"

Am so heartbroken writing all these, how can my blood brother subject me to all these, how can he go this far just to prove his hatred towards me? Yea, I know his ego is hurt because on the 31st of August he tried harassing me sexually as he normally does but I refused and locked him out. Torrents of tears flows down my cheeks as I write. I have thought it through, if I eventually drinks it and I die, I will escape all the maltreatments but I have disappointed my Aunty and also I haven't achieved anything in life. If I don't drink it I will still be suffering........... What should I do? Dear diary, am in crossroads, which way should I go?