There Was A Country

By Abegunde Israel 17 months ago 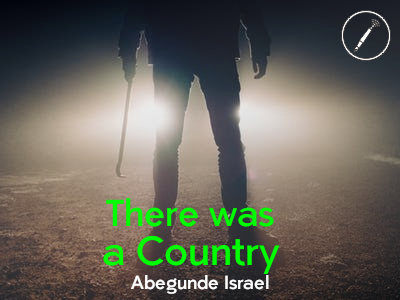 A comity of integrated people demands a government that

would represent the will of the people and that would also

drive the nation’s territorial, moral and political integrity to a global prestige.

Nigeria is not an exception.

Over the years, history had it and of course the yet to born generations of the then

was and is being run today. A system often termed by big nominalized words and qualified

by adjectives that best describe it.

Following the political scenes in Nigeria,and as how the game is being played.

It is explicable that a common script is enacted by successive administrations,

by a college of bad tutors.

same man in disguised colours reputable for all forms of maladministration, mismanagement,

Unconstitutional acts and racial preference at the successful completion of a tenure.

Interestingly,the powers and dividends owned by the nation, is shared among a comity of

For this cause Youths are silenced and made claque audience in the Nigerian political theatre.

Opinions were left unattended to and evaluative critics are swept under carpet.

“we want our nation back”, “ Nation for the Youths” and a host of other inscripted words on papers in their hands.

These youths would in years suffer the pains of entering college with the intermittent vocabulary the educational system invented called strike and resolve to a fateful end of being unemployed or probably having spent years of anxious hours with high hopes of their dreams come true would eventually see it come to a naught after being caught by the fancy of a letter envelope from the government, that upnext is an empowerment programme.

And the programme; Frustrated the youths home as they were being empowered with a wheel barrow. I had wondered on the kind of empowerment such is to a Medical graduate whose average years in college amounted to a decade

Most intriguing is a Job vacancy to be filled by a person with 10 years experience. Even by graduates not given chances to practice at all?

Devilish enough,these old political bigots makes merchandise of these idle youths every election year. Transacting businesses on whom would make capable muscle from among them.

Violence has been a major determinant of electoral victories and losses. Bought at a cheaper rate

and fend for by a few good innocent lives.

Armed security officers would come in a messiah’s camouflage only to see some teeth lie on the ground and some flesh butchered like ones to be cooked for meat.

The Beans remain unspilled that , can youths be engaged in their nation’s political affairs and make any good out of it? This is the bone of contention.

The truth however is that, the Youth holds in their hands the power and will to recover the years the locust and cankerworms have eaten.

Their engagement in the country’s maladministration and leadership problems would be a tale to be told the future generations that, “there was a country” if they would come to revive their sanity than allow intellectual suicide by engaging their muscles in all forms of violence and foul play.

In addition, self re-orientation is a key password to awakening their love for the nation. This comes first even before the widespread of the gospels of a new revolutionary Take back of their nation from the selfish and filial generation of tyrants to other citizens.

Most importantly, to rescue and fight the course of the nation even to the defeat of the long shameful years. They should ensure the security of their votes and make a true definition of an electoral process void of malpractices.

Convincingly, these revolutionary conducts must portray a visible Craze of seriousness which must be able to shun Traitors and compromisers.

More so, a full pledge allegiance to recovering the freedom of their dear nation must be made.

And to make this realistic, Youths must be ready to sacrificially give themselves up for a better representation in political or public offices.

Recently,the behavioural attitudes of youth on whom to support among those that has risen to serve their nation in major political offices is a great threat to the nation’s repositioning. You will agree with me that, these disagreements on various clarion calls to repositioning the country to a good shape is a early pose of selfish interests and representation. Just because one is not wanting to step down for the other. But don’t these youthful aspirants know that someone among their credible few has more of a revolutionary spirit and possess the Grace of taking back the country astake in the woods?

Only with the mindset of serving the people and not as domineeringly lead the people, youths would make good leaders if only they could see that there is no future in the future they had dreamt of in a comity that has Manassah as its leader. But that the future is now.

And it's left for them to mend, stitch and make right.

So beautiful stories could be written from the scars those stitches would leave behind only for the their generations hear from history say that “there was a country”.