The Trek To Destiny

By Sam Kajo 8 months ago 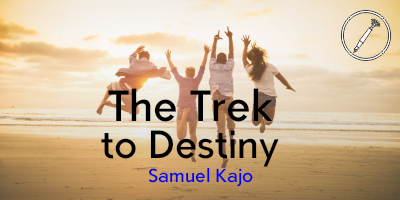 Doshima is a very brilliant and beautiful lady. She is a descent of the great Gideons family in Kwande of Benue State, Nigeria. Doo's biological parents died in a plane crash while traveling for a business seminar in Houston, Texas, United States of America. Her late father Dr. James Gideon was the only son of his parents. And Doo's mother Ruth was the only surviving child in the family of five. Four of her siblings were drawn in a stream when they followed the village kids to go and swim during a holiday. Her parents cherished her more than gold because she was their only surviving child. When Dr. James came to seek for her mum's hand in marriage, her mother wept as though she was dead but she had no other option but to let her go.

Dooshima grew under the tutelage of her granny Mama Mary. She was well trained such that other parents used her as an instructional material to teach and train their children.

Her parents were very rich but after their death, her lazy uncles collected all that they left behind. They said, "This girl is too young to take care of our brother's property, we will manage this property and train her in school"

Some years later, after completing her secondary education, Dooshima went to show her uncle Timothy her WAEC and NECO. When her uncle spotted her afar off, he frowns his face. Doo greets him bowing her knees respectfully. Uncle Tim asks her about Mama Mary.

She replies him, "Mama is very fine ".

Uncle Tim asks, "Why are you here this early morning? I hope all is well?"

Dooshima replies "All is well, Uncle,"

She shew him her results and informed him that she has gotten admission with Covenant University.

Uncle Tim told Doo that things are very hard at the moment.

"Don't be in a hurry, take it slow after all you are too young. Look at my daughter Doose, she is older than you by far but she hasn't gone to school yet. Be patient with me this year. You will go to the university next year."

Doo got angry and wept bitterly because she remembers her parent's commitment to her education. Uncle Tim pets her but never did anything about her higher education until one day she saw an online scholarship and she applied for it. One faithful afternoon, Dooshima's phone rang and when she answered the phone it was her secondary school mate Rose who called to tell her that she told her parents about her situation and they are willing to help her to further her education. Doo was overwhelmed with joy hearing the news. She ran to her grandmother Mama Mary and told her the entire story. Mama joins Dooshima to celebrate and thank God for the favour shown to her lovely granddaughter. Doo gains admission into Covenant University and her friend's parents paid for all that she needed in school including her provisions, toiletries and pocket money. Dooshima knelt down and told Professor  Jesse Akaa and his wife Dr. Juliet Akaa "I don't know how much I can really express my heartfelt gratitude to you for all that you have done for me. May God bless and preserve you for me! Am so happy to go back to school"

"It's okay stand up Doo!" says Professor and Dr.Mrs. Akaa lifting her from the ground where she knelt.

"Don't be afraid to ask for anything you need. We are here for you," says Professor and Dr. Mrs. Akaa.

Dooshima wept out of joy and said, "Thank you for your kindness, my God will reward you for me".

Five years later, Doo graduated with first class in C.U and was offered a lecturing job in Covenant University.

7 years later, she got married to a visiting professor from Harvard University.  They were blessed with two kids (notably a boy and a girl) after some years. Dooshima took her grandmother to U.S and they lived happily in America.