The Things That Eat People

By Raphael Francis 12 months ago 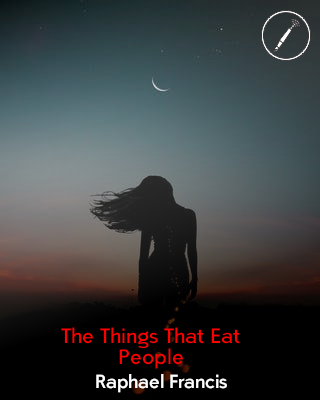 On a cold Saturday morning, you woke up quivering, timorous and perturbed. Not actually from the cold or the heavy downpour last night that flooded your street, but because of the unceasing nightmares and thoughts savaging your antsy mind.
You're tired of this lifestyle, yes!  You're tired! This life of a slay queen is really yanking you into penury.
Just yesterday, the boutique woman at Apapa called for the thirtieth time in less than twenty-four hours, she garnished her curses with 'thunders' and 'E no go better for yous'  with piercing flecks of 'Olosho,' 'Ole,' before she spat a dry 'Olojukokoro.' She had even threatened to send the police after you. All this just for the yeye clothes you got from her to look trendy for Irene's birthday. But sha those clothes were worth it. You were the centre of distraction from the celebrant herself. That week, you became a public figure on Instagram with over 900k likes. Wow!! 'Yes, I have arrived,' you said.  You called your friends to tell them, you were now officially a slay mama. To crown it all, Davido followed you. Your wish of becoming a video vixen was finally coming to reality.
As you scrolled down your contacts to search for who could salvage your situation. Your phone beeped, 'Shea you no wan pick my call abi? Make I no catch you for this Lagos ooo, cos me and you go enter one trouser'.
It was Jessica. You knew the reason for the message. She wanted those clothes you borrowed from her since last month. Hey! You exclaimed, you shaped those clothes to fit you properly, how would you tell Jessica now, you just sigh and pray that Chief Obi sends the 500k he promised you.
That Chief Obi,  he can be swift in pulling pants but like his cum, very slow in giving you cash. But he's better than all this good for nothing chewing gum boys that can't afford a plate of food at KFC, the only thing they know is to speak big big grammar with flowery accents, like all these Lagos pastors.
Another call enters your phone.You're befuddled. It's a strange number. You displayed a little bravado and picked, a croaky song comes alive, it's Davido's 'Fia'. You're told by an Android voice to press one to copy the tune. The adenoidal Android voice went on to outline the various benefits of migrating to better talk and how you can gain 50min plus 100mb when you migrate to Pulse. You just tsked and ended the call howling insults and curses at all 'these stupid network providers'.
As you sat pondering on your predicament, you remembered that tomorrow would be Anita's birthday and you must attend. You must look classy, as usual, but you're impecunious. You can't afford to wear old clothes, and Jessica won't lend you any.
You're all shades of grumpiness as you stare at the rotund man on TV telling you to say a prayer after him to be a born again. Then a thought enveloped your mind. Today is Saturday and those Lekki big men would hangout at one of those big eateries with exotic menus of foods you can't even fathom - creme brulee, cupuccino, Frappuccino, pizza Margherita. You quickly ran to the bathroom.
You took time in applying your make up, you had to look nice to catch those big men. You took one of those your skimpy and titchy gowns, you looked at yourself in the mirror and smiled satisfactorily. You wore your favourite perfume, that one Chief Obi bought for you on his return from Dubai, he told you it was worth ten thousand dollars. You showed it to all your friends and they envied you.
As you cat walked into the eatery majestically like Agbani Darego, all eyes were on you like Tupac.
You sat down in all your splendour, staring confused at the menu in front of you. The only item you could afford and pronounce was 'ice-cream-la-strawberry' which you quickly ordered, swotting the eatery meticulously like a tigress awaiting  her prey.
Then you noticed him, a handsome young man probably in his mid-thirties, he flashed his well-carved lucent set of teeth at you, his gums darker than his well-tailored suit which looked like the one you saw in Chief Obi's wardrobe. It must be pricey.
You gave him an artificial smile, a rehearsed one,  better than those ones in Close-up commercials. He got up and walked cautiously to you. An apple phone and a car key dangle from both hands. Now you're smiling mischievously, your magic has finally worked, your Maga has arrived. As he approached your table, you added more swagger than before in licking the ice cream.
He shook hands with you, still smiling, he dropped his iPhone and sat down, moving his fingers like those traffic wardens at Mainland.
You're puzzled, then he pulled a paper from his pocket written boldly on it is, "I'M DEAF AND DUMB...PLS ASSIST ME WITH WHATEVER YOU HAVE GOD BLESS YOU"
"Thunder fire you there," you cursed walking out angrily.