The Strange Story Of Men

By Raphael Francis 4 months ago 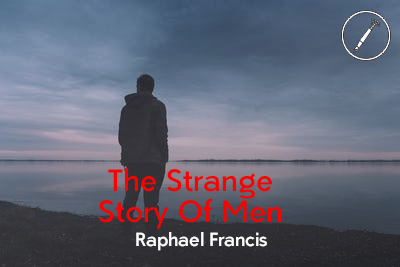 Take the monsoon season, where the rain is a constant, lulling hum outside the windows, where clothes, the windows, the pictures are growing mould in the humidity. Picture Edikan, twelve, right on the cusp of puberty, not yet grown into his own skin, staring pitiably at his mother whose body is withering like a beached fish on a hospital bed. Her condition first started with a prolonged chest ripping coughs, and rheumy eyes which she said were mere symptoms of malaria and probably her recent cravings for groundnuts. Then came the phlegms muddled in blood and a sudden bowel condition that made pepper poison, making her eat only the blander version of the food she cooked. Complications developed. Congestion built in her chest. Her condition went from fair to stable and from stable to serious. Relatives went from saying, "she'll be fine," to "Haba! This thing is getting serious oo!". The diagnosis said it was cancer, and her decline would be like many others, hair falling out in patches, mornings spent with noisy radiation machines and evenings spent vomiting in a hospital toilet. In the final days, when cancer was ruled the victor, the doctors said only, "Rest. Take it easy." When she asked questions, they nodded sympathetically, as if their nods were medicine doled out with a dropper. She realized this was protocol, their way of being nice while being helpless, and when one of them suggested "getting your affairs in order," she asked to be released from the hospital.

These events will mould Edikan into the family’s keeper, the one who attends his siblings' PTA meetings, the one who runs dual shift at the Luton Park Hotel downtown, trailing vacuum cleaners on a long leash; washing soiled sheets riddled with semen and blood; clearing away human traces in rooms; trashing ovulation kits cluttered in bathroom shelves, viagras and condoms stacked on wardrobes. At night, when he drops his little sister off in a neighbour's place, he's off to the Globe Bar, a shade like facade outlined by florescent tubes looming all over, punctuating the darkness here and there, with deafening music, those kinds of music that are loud and muddled in bouncy beats. Serving beers and taking orders from impatient customers who complained often that he was too young.

It's here, in this bar, one miserable night, exacerbated by the tepid stillness of the weather, the world outside hushed, only the whirring noise of the old ceiling fan and a distant shout of 'Amen' coming from a church faraway. That Edikan, while cleaning up and starking empty bottles of beer in its crate after the last customer left, his Oga, a frighteningly skinny man with a spray of acne across his face, can be heard punching his calculator and talking to himself in between as he sums up the day's sales. Edikan would notice a brown envelope, carelessly dropped on the floor, and like every other trash strewn on the floor, he will pick it carelessly, only to be drawn aback by its weight and seeming contents meticulously wrapped.

The next day, Edikan would've paid his mother's hospital bills, his little sister's school fees and even the scarthy palms of the landlord who kept hitting their ricketed door hard enough to splinter the timber from its hinge anytime he noticed Edikan was in, was greased too.

Now take the same story from another angle.

It's dark, still not night, though; A young man is walking under a hazy-mooned sky, pausing sporadically to shield headlights screaming off windscreen from blinding his eyes. He clutches a brown envelope in one hand, carefully, so that it doesn't fall off from its grasp. After a bend, he pauses, looking back anxiously fidgeting like a kitchen mouse. A memory flickers inside him: a hospital ward comes alive, he's standing there, staring at the sunken figure sprawl on the bed like a stringless puppet from the shadows cast on the wall by the dim flashlight of his phone. He began flipping frantically, the Efik Bible in his hand, trying to find the potion scribbled in a piece of paper the figure on the bed passes to him. He finds it, and begins to read:

Take up shield and armor; arise and come to my aid.

the figure repeats after him, her voice is shrill, coming out in weak trickles like water from a drained tap. The shadow of the moon, big and round, cuts in from the window exposing the figures frailty more pronounced like she can be broken into many pieces. Her vertebrae stick out—round, protruding marbles in the back of her neck, visible in the t-shirt she wears.

may their path be dark and slippery, with the angel of the Lord pursuing them.

He continues, she responds. But they're interrupted by a knock on the door. A man holding a stethoscope with hair cut into a sensibly short shag, with a fatigue face, that looks something like a younger and more moneyed version of Buhari, walks in and examines the figure. He signals at the man to meet him outside. 'we need five hundred thousand naira to operate your mother before noon tomorrow, if not, I am sorry' the doctor says, walking out.

He jerks back into reality by the invective thrown at him in English and mishmash of mangled dialects by an angry driver--- stupid man, you wan die abi, Ori'Okpe. He noticed darkness has covered everywhere, he walks into the street, his envelope still in his grasp, thankful for the anonymity the darkness provides.

He stops at a bar with loud music and a boy serving beer. He orders for a bottle of water, then a bottle of beer afterwards. He fiddles with the envelope and remembers what he had to pass through to get it, even though he feels his late father's car was worth more. He shrugs, when a lifeline comes, you don’t evaluate whether it’s the right one. You just grab for it and hold on. Hours later, he dozes off. When he wakes, the bar is empty, he calls the boy who looks worn out and pays him off before stepping out.

When he arrives at the hospital, his mother is dead. His envelope gone, he walks into traffic daring the cars to hit him. When none did, he embrace the lagoon with ease.