The Secret Of Secret Place

By Victor agbo 2 weeks ago 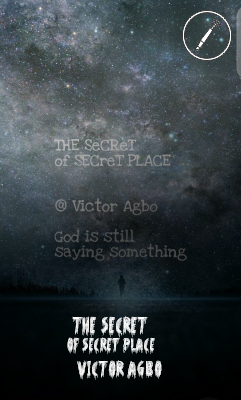 THE SECRET OF SECRET PLACE

1  Secret - adjective : known about by only a few people , kept hidden from others like secret information/ meetings/ talks

.2 The word " the secret " singular - ie the best or only way to achieve something ,the way a particular person achieves something - personal secret

So there's a certain secret how do one thing or other to get what they want. In case study of Jacob

He needed encounter for liberation

Eg shall I let you in ( tell him) the secret.

3 The word " the secrets" plular ; a thing that is not get fully understand or that's difficult to understand" universe secrets or general Secret"

Example how Haman casted the pur to manipulate king ahasuerus ( Esther 3 vs 7) that's also a secret.

IDM in secret : without other people's awareness eg the meeting was held in secret , that's why you hear secret cult.

For instance political meetings, business meetings and cult meeting are held  "in secret"

My brother and sister mark the word " IN SECRET"

The main types of secret place

1 personal meeting of Secret place: that's you in person going to enquire the secret.

2 General of secret place : a whole or many in quest to know something then they can be called cultists , scientists , investigators and problem seekers .

Both the good ones and bad can go for both the personal and general of SECRET PLACE.

Example men of God can gather in prayers that is another utterance of the spirit.

People can go to enquire about you or report to one sort like that is called necromancer.

As we move forward ,I ask for God's wisdom .

And that job was perfect , wealthy, upright ,God fearing and he eschewed evil . Let us make the word " God fearing" a subject ( job 1 vs 1-5)

Brethren for you to be God fearing , that automatically means you respect God , you are righteous and you are far from sin.

At the same time he was also wealthy" that is rich and good in health" because God's word say " I wish that you prosper and above all also be in good health, even as thine soul prosperth" .

Job is a man whose level of God fearing took him to sacrifice against the sin of his children and he fought against evil ,so a certain thing happened.

An omen ; they was a general meeting In secret which wasn't against job but where the accuser of the brethren ,the whole meeting went against job without the knowing of job.

Because job's character is questionable.

For the accuser of the brethren is here

And we are marching the name Lord

The devil has experienced heaven,so Satan began to doubt whether job truly loved God or is it because of the wealth and children.

So they was a meeting at heaven ,the devil was also there

Jesus! We're few surrounded by many

That has crossed the river.

There is one thing to know whenever you prosper and at the same time fear God, the devil is confused.so God asked the devil whether he has taken notice of job ,but the devil instead of told God that is because of the blessings. Instantly there was a bargain without the notice of job ( general meeting of secret place). Job 1 vs 6-12.

After a while job lost all but his health and life ,no riches and children again.

He still isn't aware of the meeting..

Yet he feared God more and the devil wasn't satisfy and he for " skin for skin" ( job 2 vs 4-7) that's the second Meeting without the knowing of job.

Meaning many meetings or more meeting are to be held without your permission.

But still his integrity is there ( fearing God) he didn't sin with his lips, sinning with the lips are the easiest sin to commit like lies, blasphemy and filth jest etc but job fear God" ( job 2 vs 8-10)

Even though he feared God,he still suffered without cause and trace because of secret meeting.

God, you never caused my foot to be moved

And I carry your presence all I go

Mortal man and you are the awesome God .

God didn't allow job's Foot to be moved ,this predicament lasted for years and it was devastating.

Job became tired of his situation and he entered into what I called personal of secret place and God remember job and answered him . ( Job 40 vs 1-7,13)

Where legs can't go to

Is the secret of the most high.

And is where my heart long for

And when I will find it ,I will know×2

Prayers; Abba Father, Almighty God draw me to the depth of your heart, grant us the secrets to ready for war. Amen

The same case went to queen vashti but a bit difference . King Ahasuerus had a bouquet ( another type of meeting ; because meeting is the gathering of more than one). The bouquet was with his Chamberlains and the princes of Persia ,so he summoned for the presence of queen vashti but out of ignorance ( ignorance is the out not knowing the benefits and consequences of a particular thing) and ignorance could make you and me not understand the secret powers . Because she wasn't sensitive in the spirit ( lack of the secret place because the battle is fought in the spirit before the spiritual). Out of ignorance,she lost her place as a queen.

I am desperately search for a place

I am desperately yelling for a

But when I found it ,I will know

I need your secret place.

First of all A meeting was held for the king Ahasuerus to showcase his riches and the queen is also part of his pomp ,but when the queen turned down the call . Ahasuerus found no fault ( his anger burned within him ) Esther 1 vs 12 But there's always a middle man because the meeting has entered another dimension" what's to be done according to law" the middle man asking ( Esther 1 vs 5)  ( secret of the secret)  ,but a certain man called memucan one of his Chamberlains arose against the queen vashti ( that's bad ones in the secret place) Esther 1 vs 16-22

Prayer: father help me to be sensitive and strong in the spirit

2 any memucan against me ,O! Lord plead my cause .

So Haman has entered the secret to plan it but on Zion we stand ( Esther 3 vs 7) ,so without Haman knowing his plans has been clicked  .

There's a middle man and it's Mordecai in this aspect.

The middle man stands to connect us to the spirit realm .so Mordecai told Esther all ( Esther 4 vs 7-15).

To cut the whole story , Esther and other Jews entered into praying & fasting with supplication another type of secret of the secret place because prayers connect us to the spirit man .. Esther 4 vs 16

And God of the secrets , Jehovah jireh showed them mercy because they have entered bethel and fought their battle (Esther 7 vs 1-10)

Prayers : what's your problem, wherever they have gathered to displease or make you commit sacrilege in the mighty name of Jesus Christ,let their meeting be put to confusion.

2 open your mouth and say" father draw me to the secret" amen .