By Aniekan Andikan 6 months ago 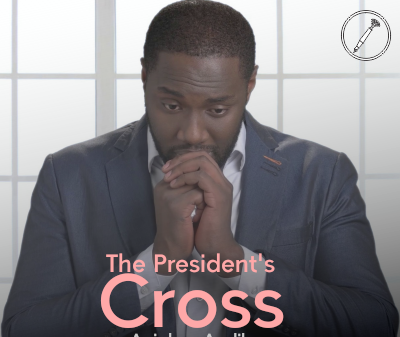 There was a soft knock on the door, it opened and his chief of staff stepped in to announce the arrival of the Attorney General of the federation.

The president glanced at his chief of staff, "I'll be there in a minute," he said absentmindedly.

"Yes, My President," he closed the door and left the president alone.

Meyi Oba who was sworn in as the 16th president of Nigeria earlier in the week sighed and at that moment decided what he must do. It was risky and may cost the lives of some important citizens of the country, including his own but this was the only way to put an end to an epidemic that has troubled his country for more than two decades. He knew that once he talked to the Attorney General, there will be no going back for him.

What he read in the reports shook him to the core. It took him longer to finish the report because of the effect it had on him.

The new president was an ardent follower of the horrible events in the report but what he read on the newspapers and news blogs, and what he saw on television were grossly euphemized when compared to the official report he just finished reading.

He sighed again, rotated the swivel chair he sat on to take a long look at the bronze Coat of Arms mounted on the wall behind the president’s desk. He sighed for the third time, got up from the chair and went around his desk towards the door.

Before Meyi Oba stepped into the unofficial meeting room which was just a few doors away from the president’s office, he contemplated whether to allow his chief of staff to join them in the meeting. He did not want to give Charles, his best friend and chief of staff the chance to talk him out of what he had decided. He did not want to let him know what he was about to do until it was too late for him to talk him out of it.

At the same time, it would feel awkward asking him to excuse them since he was already with the Attorney General. Apart from making it hard for him to do his job, it would undermine his authority and that could be a big problem for his government. He decided that his chief of staff could stay, but, he would bring the meeting to a halt if he tried to contribute at all.

The meeting was not really necessary. He only called the meeting to make the Attorney General feel useful in his government. He also foresaw more useless meetings between them in the future because he relied more on Charles for legal advice, after all, he was a law lecturer before he was convinced to join politics.

He opened the door and stepped into the room. The Attorney General sat on a double chair couch to the left while his chief of staff sat on an identical couch to the right. They were discussing while facing each other. As soon as the president stepped in, they stopped talking and stood up.

"Please, there's no need for that. This is an unofficial meeting," he waved them down and moved ahead to sit on the single chair couch at the head of the arrangement. A rectangular glass table sat on a rug in the center of the room.

"Sorry to bring you out here on a Sunday afternoon..." he addressed the Attorney General "...but I need your input on a matter that is bothering the country.”

“My President, I am always at your command, whenever you need me to be of service,” the Attorney General replied the president humbly even though he was almost twice his age.

Meyi Oba glanced at his chief of staff then faced the Attorney General who wore light blue caftan with a matching cap. The cap did well to cover most of his white hairs but there were heavy streaks of white hairs on his goatee, his mustache and his heavy brows. His forehead was heavily lined. The president suspected him to be in his late sixties or early seventies. He had appointed him the attorney general because the leader of his party had asked him as a special favor.

“Do I have the power to order the top brass of the armed forces to move to a particular location for a period of time?” he knew the answer to that before he asked.

“As the commander in chief, you have operational command over the armed forces. You can deploy them wherever you want. You only need legislative approval if you want to declare war on another country,” the Attorney General answered, wondering if it was a test.

“What if the top officers object to going to where I am sending them, can I remove them from their command for that reason?” he asked.

“Yes—” the Attorney General started but his chief of staff interrupted him and said.

“–But it is a political issue for–”

The president stood up abruptly, the other men followed suit. “Thank you for coming,” he shook the Attorney General’s hand.

“I’m glad to have been of service, My President but are we done already?” he asked the president politely trying to hide his surprise.

“Yes,” the president said and smiled. Both walked together towards the door. Meyi Oba opened the door, the Attorney General gave a curt nod and left the mini-meeting room. The president went back to his seat. His chief of staff was now perching on the edge of the couch.

“What is going on?” he started, throwing his hands wide with the palms facing up in front of him. “I am your chief of staff but I feel left out from what you are planning. Why are you talking about firing the army generals? I hope you know that doing that puts us in a weak position politically and we have your second term to consider, we can’t–”

“Charles, calm down,” the president interrupted him. “Did you read the report? The one I was reading throughout yesterday?” he asked his chief of staff.

Charles exhaled audibly, “I scanned through it,”

“It’s horrible and I have to do something about it fast. Very fast,” Charles nodded his agreement reluctantly.

“Yes, My President, but the ministers may be out of the capital or out of the country, they usually have 3 days’ notice for executive meetings,” Charles pointed out.

“Well, during the swearing-in of the Executive Council, I told them we were here to face the business and not to do business as usual. I also said they should not leave the capital except on holidays. This is…” he looked at his watch “…3.33 pm, fix the meeting at 4 pm and the security council meeting at 10 pm. That should give everybody at least 24 hours. Enough time for everyone to attend the meeting. Clear all my schedule for the morning and afternoon, I want to prepare for these meetings,”

“Yes, My President,” Charles stood up to leave.

“One more thing,” Charles paused and paid attention. “Let them know that anyone who fails to attend this meeting, for whatever reason, will cease to serve in this government,”

“Yes, My President,” Charles gave a nod and moved towards the door.

Before now, he was nursing hopes of being chief of staff for two full terms but as he neared the door he began to wonder if this government will even complete one term in office.