The Pastor's Wife, Shepherdess Emily Onuoha Has Gone To Meet Her Lord

By Okechukwu Ukegbu 4 weeks ago 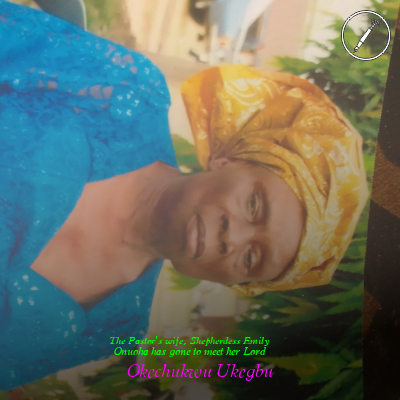 The pastor's wife, Shepherdess Emily Onuoha, has gone to meet her Lord
By Okechukwu Keshi Ukegbu
There was time when becoming a pastor's wife was a virtue. Such decisions were not provoked by the economic considerations attached to them, but because marrying a pastor subjected a woman to strong disciplinary dispositions. Marrying a pastor wasn't because of the economic tractions or trappings neither was it to better the economic lots of the wife's family. No, it was far from it, because even up to date, the pastoral ministry isn't that lucrative more than other vocations.
The sterling qualities of young Emily attracted her to her heartthrob, late Pastor Israel Onuoha of Abayi Ohanze in Obingwa local government area, Abia State.
Indeed, Shepherdess Emily's dispositions marked her out for marriage to a minister of God- the quality character traits she exhibited till she answered the call of her saviour recently.
Her marriage wasn't made in heaven, as none is made. They passed through thick and thin  but Mama Emily held forte.
Visiting Mama at her in-law's place, Comrade Ikechukwu Nwogu at Amaise Umuokereke Obingwa, Abia State, where she spent the last two years of her life, was fulfilling as she won't spare a moment admonishing on the need to uphold the virtues of life. She won't hesitate to remind you that" contentment is the mother of all virtues". Yes, Mama was 100 percent right by the above assertions because lack of contentment is the bane of the world in contemporary times. Even at close to 100 years,she was mentally sound.
On the other, fate,as would assume, wasn't fair to Mama as out of her 10 children, only four are surviving her. But in life, number doesn't always matter sometimes. Mama didn't lose much as four of her surviving children gave her quality attention.
Kudos to Mrs Eziaku Iheanacho, Comrade Ikechukwu and Mrs Nwanyioma Nwogu, Arc. Hope Onuoha( Hope Farms) Mr. Enyinna Onuoha for availing Mama quality care when she needed it.
Adieu the Pastor's wife.