A Journey Through Okey Nwachukwu's Talon Of The Python(1) 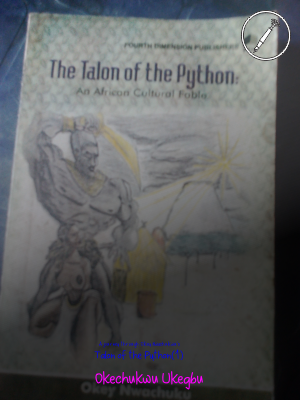 A journey through Okey Nwachuku's Talon of the Python (1)
By Okechukwu Keshi Ukegbu
Before now, even up to date in some African cultures, it is widely upheld that the dead have some strong links with the living, up to the point that the dead play critical parts in the affairs of the living.
Some works by African authors have expatiated this, such as Kofi Awoonor's" Songs of Sorrow". Okey Nwachuku's " Talon of the Python " is another work that expresses the calamity that the living is bound if the the dead is not respectfully treated.
In the Igbo society decades ago, the spirit of the dead, especially the wealthy and the highly honoured in the society, is believed to be floating and stranded if a special traditional rite, known as "Okwukwu" is not performed.
Lives were consumed as a result of delayed okwukwu for Ezeala, the village head of Umelu. On a market day, when activities of the market were in full swing, a mighty iroko at the center of the market fell and scores of the locals were consumed in the calamity that was tagged " the most gruesome in the history of the village and the environs.
When divinations were conducted, it was revealed that the calamity was as a result of delayed okwukwu for Ezeala. As the novel unfolds, intrigues, manoeuvres and manipulations took their fullest expression.
The status of Ezeala as the village head requires that a human sacrifice other than ram. In such situations, a slave condemned to death by its sellers and purchased from the slave market, were designated for the sacrifice.
Ahunma, a beautiful woman from the distant neighbours of Umelu had to pay the price of beating up the husband, her mates, and destroying the husband's property. In the era under review, it was highly forbidden for wives to dare their husbands. This attracts a dire consequence as the culprit is sentenced to the slave market.
Ahunma's emergence as the prospective sacrifice for Ahunma was laced with misfortune. The fist shot was recorded when Nduka, one of the emissaries to Ndiubani market died under controversial circumstances.
Oparadike, the protagonist of the novel, could help matters and contributed to the series of calamities  that trailed the whole episode when his attraction to the slave woman developed into plots to save her.
It is highly abominable for a sacrifice destined for okwukwu to disappear shortly before the execution of the deed. But this is what exactly happened. Ahunma was no where to be found when the platform for the sacrifice was set and the expectations were high. Who is responsible for the abomination. The question deserves some appreciations. How can the gods be placated for this.
As this puzzle was probed into, and solutions were proferred, the village was plunged into endless killings.
The oracle had to be consulted again to proffer solutions to this calamity, and it has to be immediate.
A delegation of four men led by the village chief priest, Ibeji was sent to consult the oracle to proffer remedy for the impending calamity. But before the team set out on their journey, Ibeji had to pull a fast one on Oparadike, who he strongly suspected facilitated the escape of Ahunma.Two strong rascals in the village were detailed to capture Nneta Oparadike's younger for sacrifice in place of Ahunma.
For Ibeji, Oparadike has to pay dearly for this. The suspicions were apt as Oparadike was the only person that had access to Ahunma.
Unfortunately, Ibeji's plot backfired, not only that he was consumed in the ensuing murders, but his wife, Ahuzi, was also consumed. Neither were the two rascals spared. It is dangerous to dare the fiery Oparadike as the fear of him is the beginning of wisdom in Umelu and environs.
The outcome of the divinations conducted later inflicts a question mark on the credibility of pronouncements of the oracle.
The work is loaded with intrigues, deceit and murder. It is a must read for those who believe in manipulations to bypass obstacles to achieving inordinate ambitions.
The story could not be better told by anyone else other than Okey Nwachuku. Despite his stay in United States, his rich knowledge of telling stories, beautiful ones indeed, could not be eroded. Part two of the novel is another suspense-filled work.