By Owolabi Juwon 12 months ago 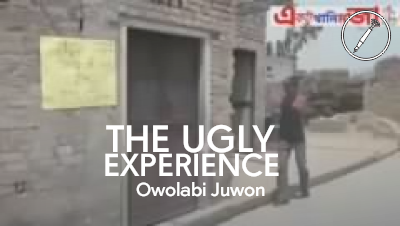 IT WAS IN THE MIDDAY SUN YESTERDAY, I WAS Damn tired and I urgently needed some siesta to refresh myself against the tasks ahead of me. Mean that I went to farm very early in the morning to attend to some pressing chores. Of course, I was in the farm till two o,clock ,if I guess fine, in the noon, under the vehement scourging sun that beamed the body with peroxiding temperature.

I was earnestly praying within the parlour of my mind that we should be through on time so as to go home quickly.

In view of  this, i was vigorously checking the work out in execution.

The birds with their sweet voices were echoeing beautiful songs to gear my drive and the closeby river was with its quotable quite movement accompanied the birds concerto.

Yes, after all, I concluded the work with a beaming smile across my heart,"yes, I'm done finally".

I went home to have some quite time on my bed; I closed my door at the back, off my cloth(because of the roasting heat) then I stretched my body straight on that big bed  after the day long work.

I slept not up to an hour or so, I heard some very loud noise outside my house. I was very much furious because I was nearly down to that realm when the noise arose.

I went out just to see some multitude of people gathered at the front view of my house,"why are they here" I could not say in particular but I could notice the strong presence of some heavy body men moving to and fro but with no far distance from other crowd.

They spite up in the sky, with their eyes, they parked it. It was so strange and unusual. Each faced the person of his kind-wish and it started in earnest.

They were indeed cantankerously bewildered with fight and held one another tightly.

Throwing one another up the sky and the ground was friendly enough to accept their spine down the earth.

I was curiously anxious to know the cause of this strive, I checked people of dude minds who could explain to me in simple terms what really transpired. But at first ,I could find none except for their vituperative conversation which gossipped the bone of contention to me.

It was really nothing to write home about, I discovered that some of our  people are suffering from a disease known as *"intellectual poverty"* and *" cerebellum defections".*

They were actually fighting over "#200" a politician purposefully gave them.

Are we even ready for our own future?

Or are we some kinds of gambler clown that make nothing out of something but fun?

We make tomorrow from today!

Do well to build your foundation in the sunny day so as to have something to help your hay.

Politicians only need you during election, thereafter, you are lone and on your own; remember.

Stop fighting your kinsmen on the account of unprofitable dealings with the politicians.

Election will end but people will indelibly remain.

Never break up friendship tie because of political affiliation.

(Association of outside the box thinkers)

" *Writers take every event seriously and then creatively turn them into* *something that ordinary person could have thought to be nothing*" Owolabi jo.