THE COURTS ON RAPE

By Shedrack Akor 18 months ago 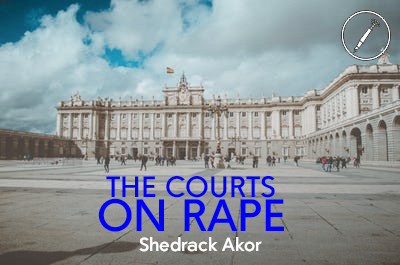 A learned writer defines rape as having sexual intercourse with a non consenting female with knowledge by the accused that his victim was not consenting. Both the criminal code(applicable in southern Nigeria) and the penal code(applicable in northern Nigeria) have proffered legal definitions of what may amount to rape. section 282 of the penal code provides:

"(1) a man is set to commit rape...who has sexual intercourse with a woman in any of the following circumstances:

(a) against her will;

(b) without her consent;

(c) with her consent when her consent has been obtained by putting her in fear of death or hurt;

(d) with her consent when the man knows he is not her husband and that her consent is given because he is another man to whom she is married or believes herself to be lawfully married;

(e) with or without her consent when she is under fourteen years of age or of unsound mind.

In law, before a person accused of a crime can be convicted for the commission of the alleged offence, the prosecution (the party who initiated the legal proceeding in court) must establish both actus reus (physical element) and mens rea (mental element). This is because under our law as it pertains to crime  an act alone does not make a person legally guilty unless the mind is legally blame worthy. This principle is encapsulated in the Latin maxim "actus non facit reum nisi mens sit rea". Since the actus reus(physical element) in rape is penetration of the vagina, the action of the prosecution must fail unless he can lead evidence to show that the accused penetrated the victim. In the case of POLICE V ALLAH NAGANI (1968) NMLR, the victim complained that the accused 'lied on me' the trial court refused to accept that as a sufficient evidence for sexual intercourse. Also, in R V SEIDU (1960) WRNLR 32, the accused wanted to satisfy his sexual desires by other means order than by penetration. The court held that there was no penetration, hence no rape. Generally, the onus (burden) of proof in criminal cases lies with the prosecution. And in other for the prosecution to succeed in his action he must proof his case beyond reasonable doubt, as any doubt,lacuna  or inconsistency in the case made out by the prosecution shall be resolved in favor of the defence. In the case of IBO V ZARIA NATIVE AUTHORITY (1962) NNCN.30 it was alleged that the accused raped the victim. The doctor who examined the girl did not clearly specify what area of the girls private part was ruptured and the High court refused to accept the evidence as sufficient to  convict the accused. To a lay man, this is not only atrocious but a miscarriage of justice but the fact is that the law is not quick especially in criminal cases to pass judgment and sentence. The reasoning of the courts is usually that, it is better that ten guilty criminal evade justice than for one innocent man to be punished unjustly. Besides establishing actus reus the prosecution is saddled with the unenviable burden of establishing mens rea. Basically, the prosecution must show that not only did the accused penetrated the victim, but that the accused had the knowledge that the victim was not consenting. In the case of R V MAYERS(1873) 12 COX. CR.C 311 the accused had sexual intercourse with a woman who was sound asleep. The court held that since the victim was put in a position where she could not truly have expressed her will, the accused  was found guilty of having committed rape. Similarly, in R V CAMPLIN , the accused had sexual intercourse with a woman after getting her drunk to "excite her" the court found the accused guilty and convicted him of rape.

Some legal writers have argued that the offence of rape is gender biased. This is because, under our law a woman cannot commit rape.(only a man can rape a woman) we have stated earlier that the actus reus of rape is penetration. Only a man, because of his penis can penetrate. A woman cannot pentrate and this is the basis on which these writers premise their argument. To this end, some are clamouring for a constitutional  amendment of the law to be all inclusive.