NOT FATE BUT FAITH

By Shedrack Akor 16 months ago 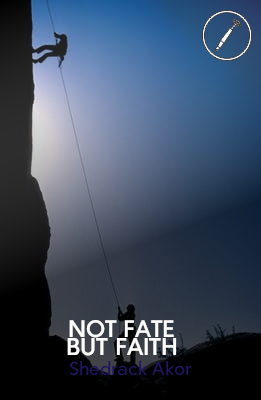 There are those who seem to believe that everything about our life, from the day we draw our first breathe to  the day we finally close our eyes to be laid to rest from this world  is predetermined. Those who hold this lofty view further argue that as human beings, we are only acting out a script predesigned by a being greater than the perceptibility of our thoughts or the strength of our imagination. The proponent of this view further justify their assertion by citing the helplessness of man when confronted with the harsh realities of life. In Nigeria for instance, when a man dies, it is not uncommon to hear sympathisers saying to the bereaved " wetin go happen must happen and as human beings we no fit do anything to take change am"

However, on the flip side, there are those who hold a contrary opinion to that expressed above. This school of thought, like the first, agree that there is a supreme being (God) with greater power than all human beings and creatures. But they hold the view that this supreme being (God) has not preordained the life of anyone. They argue that God has given all human beings, the willpower to decide what they want to make of their life. The proponents of this school of thought hold the view that every human being is born unique and endowed with all that is needed to lead a successful life. Albeit, the decision to succeed or fail is for the individual to make.

Those whose understanding of life is anchored on fate, query the submission above by those who believe in faith and they pose the question, " what would you then make of those who are born into abject poverty, where the circumstances of their birth has given them very little or no hope to even aspire let alone succeed?" In response, those who believe in faith would tell us that 'your life is what you make of it and not what your background or the harsh realities of life dictate to you'.

In our world today, there are a lot of people who believe they are just acting out what have been scripted for them. These set of people have no ambition, goals,principle and they have no faith. Some of them will even tell you that when a man dies, he goes back into a state of nonexistence.Therefore, faith is of no importance. Whether or not this assertion is true, is left for you to decide. But if you believe in fate and yet you still make decisions, and evidently this decision shape or impact your life one way or another, it is my humble submission that you contradict yourself. Instead of cower under the excuse of fate, why not decide to take a leap of faith today. It could be with your religion, career, personality, or ambition. Instead of resigning to fate, I choose to show faith. What about you?