By Felix Zachariah 4 weeks ago 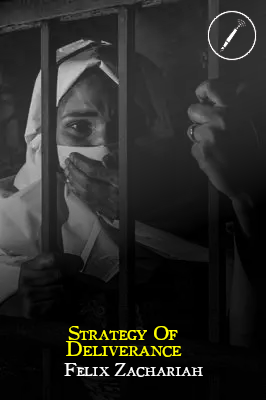 I am not a preacher, I am not fit to be one but it is detrimental to the spiritual growth of my brethren that I, Felix Zachariah become reticent concerning  the matters of Souls.

We've come to know for a truth why the Devil did what he did to prevent us from 'growing' in fear of the Lord.

The truth which was kept hidden from some of us so that we'll come to a point in our life that we begin to wish away 'responsibility' because the pleasure that the world gives had blinded us and rendered us men,  greatly disadvantaged.

Illumination is the antidote to illusions: we're now able to understand exactly why. Yet, illumination does not really guarantees freedom. It is the application of wisdom that  is the delivering factor from afflictions and illusions.

Unfortunately, many have even now failed to see how that the enemy (the Devil) had bruised us so hard in the ring of pleasure and convenience. He rejoices over the casualities from the battlefield of this Life in Time.

Thus, it obviously becomes unfair to always blame the Devil every time we fail God by falling away into the Dark and gory valleys of temptation.

It is the act of the will to give in and succumb to manipulation.

Manipulation brings about transgression; transgression becomes somewhat of a product of our decisions. In that, temptation is not a license for falling into sin.

For the will becomes powerful enough if it is tuned to the Spirit that 'dwelleth in our mortal bodies.'

The will of men negatively exercised can result in demonic oppression and possession.

It could culminate in separation (death).

Once in the Bible, Cain was faced with a temptation he could have overcome but he was bent on 'acting on his will.' (Gen 4:6-16)

He paid the price with his life.

Again, In Genesis 39:1-19, Joseph fled from Potiphar's wife arms [by the act of his will in tune with Heaven's writing of ordination concerning his life]. It was deliberate, as well as intentional.

Though there be varying degrees of temptation, God only allow us pass through that which we can (by only His grace) survive.

Both men had a will. Whilst the former uses his to dishonour God by murdering his brother, the latter used his to honour his Maker because he understood the evil strategies of Satan.

He knew that one can call the Devil names, anything bad at all may fit his description and characterization but as a 'cunny serpent'  that he is, it is biblically wrong and otherwise to term him 'a fool'.

Jesus himself was tested in the wilderness in greater degree, when compared to ours, by the Devil to which he never succumbed rather, he rebuked Satan.

Are you like Cain? Is your will too stubborn to  align perfectly with God's? It may not end well with you.

Everything done within or without God's will has it pending repercussions.

That explains as to why Cain ended in the Land of Wandering:

Why Joseph, though imprisoned for the act of his will in alignment with God's was released and made Governor over Egypt--the same land which he had been living in as a poor servant.

It lastly explains why Jesus returned from the wilderness full of the HolySpirit and with Power.

What is the 'acting on the will of oneself' ?

It is simply, an operation outside the jurisdiction of God's word.

Self cannot identify with God just like biblically, Light as we know has nothing in common with Darkness.

Now, this is the very problem that had culminated into an almost unremediable disaster.

God's will is superior to ours. Should we ever find ourselves operating outside His will then we are in error and without his divine intervention, we aren't far from the impending doom.

It is my earnest prayer that God Almighty will do something with us [which] is beyond utterances that will be for a sign unto those who are 'coming up hither' in the faith.

I see a revival cloud hovers here and there is a lot of work to do for the glory of God.

If Jesus Christ overcame sin then you and I are overcomers, we are more than conquerors through Christ which died for us and as us.

Yes, Christ died in your stead on the cross at Calvary.

He became the substitute and the receiver of thine comeuppance at the receiving end of death, even on the cross in the manner befitting only of a criminal. He became a criminal in your stead.

Can you really imagine what depth of love this is!

It was by sacrifice and the shedding of His precious blood for You. Yes! He did it for your freedom.

Now, You are no longer under the Law but in union with God.

You will not die from attacks because Jesus said 'it is finished'.

This solves the problem of sin because sin is an inclination in the flesh and we are not living in carnality that grace may abound and we'll definitely not as the LORD helps us continually.

That is why the Bible says, that 'walk ye in the spirit and ye shall not gratify the lusts of the flesh.'

God is intentional about his purpose for your life.

Addictions and temptations are not the elevators to your destiny.

If there'd been a way that God prescribed beforehand, through which mortals become immortals, men became gods, and prodigals can become sons and heirs.

It is only by the help of his Holyspirit being able to access our will and shutting out the influences that plunge us into darkness and hypocrisy from the outside through the channel of the flesh.

What is the HOLY SPIRIT to YOU?!

He is in you to build you up in confidence and the fear of God.

He is in you to tell you God's mind.

He is in you to seal your testimony unto eternity.

He is the teacher of The meek.

It is the humblest of Children that can find him.

He is in you to tell a perfect story in Heaven

He is in you to reveal the intent, and perfect will of God in a life.

As long as you cleave unto the path of Purity, he will make you pure.

You have heard of him before or this might just be your first time.

You will find him sooner than later.

When he comes to you, he will perfect every detail of your wrecked life.

It starts with from your heart, then your mind and your life.

There's a beautiful story God wishes to tell a generation through you.

It may not even be about you, because the principle remains that His Kingdom always come, then His will been done in the Earth in like manner as it is in Heaven.

God will not lead you into temptation but he will deliver you from every evil as you use the power of your will wisely even as been in a Koinonia with the HolySpirit.

May Grace and Peace, Wisdom and Understanding be multiplied unto you all in Jesus' name.