By Aniebiet Effiong 7 months ago 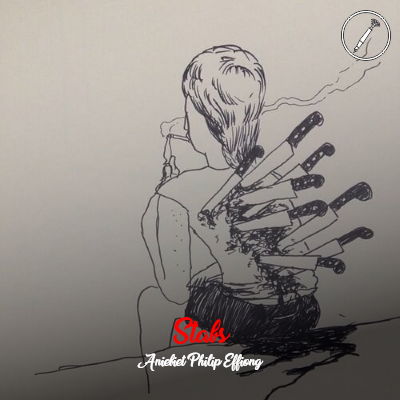 There are many things that stab a man dead. They are poverty, frustration, heartbreak, Nigerian government.

Somewhere in the world, there are men who dwell in a dead land--unknown to them--but laments for lack of food and hunger. How does the living find food in a dead land? I dare not mention the land by name, lest tantrums are thrown on me; lest they begin to preach of how unpatriotic I am. No, I won't, cause if I do, they'll say I hate Nigeria.

This place is a monster we have been building over the years, and today he has grown and has come to eat us all.

Your home is a valley for dry bones - a place for everything dry. Your head is a city for broken things like those children with no home who roam barefooted on streets. On Your skin are photographs of Your mother who fetches firewood from the bush every day for sale. Scars. Your tongue is burnt with hot saliva of penury and starvation. You are a dark house with cracked walls.

Life is not a boy who tucks in his well-ironed uniform after taking a full creamy tea and bread in the morning before leaving for school. Life is not a boy on a swing. Life is a girl who cracks palm kernel nut to chew every morning - hard.

You walk into the room, you find your father hung to the ceiling fan with a fine rope round his neck. Depression is real. He said He'd rather die than sit to watch his children suffer.

You hear people shout 'Ole Ole'. You run to see who is 'Ole'. You see Chike Your brother, but you can't recognise his complexion and face. He's charred. Black. Burnt to death. They say he was caught stealing fifty Naira from a woman's purse. He wasn't lucky at all. His God could not save him from the hands of the angry mob, unlike the God of those rich politicians who steals millions. He was beaten as if his name was Abacha, like he took away the budget of the whole nation or maybe he stole the money meant for the dilapidated roads of Aba. Afterall a rich man's God is different from a poor man's. You cry out your eyeballs and Your heart. Your brother, a hungry boy who finds his way to a strange home, in the eye of an angry mob.

Sometimes You imagine becoming a snake so you could swallow millions and disappear abroad just to end your sorrows.

A man is not a boy with strands of hair beneath his chin. A man is a Nigerian Arsenal fan - he knows that life is full of downs and downs, sometimes You lose, sometimes You lose. A man is a boy who have tasted different kinds of meal served by life; sour, bitter-sweet, bitter, yet he never gives up. You remember the things round Your father's neck; depression, hardship, poverty, and the fine rope. The things round his neck were the things that killed him.

Hope is waiting for a tomorrow that doesn't exist. Tomorrow is a forever You don't live to see here -- You may see it elsewhere, not here. That is why Mama Nkechi writes on her shop "No credit today, come TOMORROW". You just have to struggle for survival, sleep, and wake up to see tomorrow on the other side. Here; you fight for survival, or You take a flight for survival.

The struggle for survival begins. Your sister watches as the sun rises on her thigh, and sets in the thing between her thigh. All she gets is two dirty and scarce hundred naira notes for her transport fare, plus 'I shall call you later'. Life is give and take, she pulls down the thing around her waist and gives out the one in between her legs.

Her ways of survival are as bad as the roads of Nigeria spoilt by the acidic rain that falls every day.

One of the ways of how to die is loving a Nigerian girl who doesn't love you back. You claim to be in love with Ada. You feel love is what can keep a man from drinking from his cup of grief to stupor -- it may be in some other part of the world. You open through the scriptures of your heart, you preach your love to her from Genesis-to-Revelation. You spend all you have on her. At last, all you get from her is a whisper that pierces through your heart 'Tufiakwa!'- whispers of rejection.

Now you know that everything in Nigeria is out to kill you; rainfall - acidic, love, bad roads, air - it can choke you to death.

One day, you sleep and forget to wake up. You don't know how this happened, if you were shot or something. But you know that death gives men the opportunity of seeing tomorrow.