By Chisom Ugwu 4 weeks ago 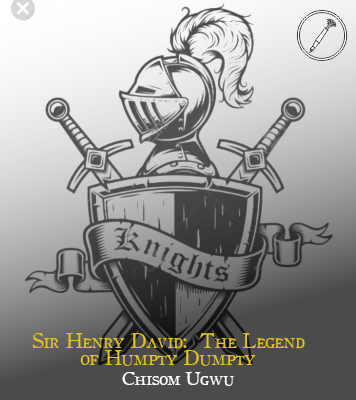 It was the year 1347, during the reign of King Edward III.
News had just reached the King of an incurable disease called The Black Death that was rapidly spreading from Asia through North Africa and Europe.

The King had called an emergency court of his wise advisors, esteemed noblemen and the most valiant knights to bring up a plan. He was but a young man thrust into a position of responsibility too soon and too underprepared.

"How do we keep this plague away?" he asked them, leaning forward rigidly on his throne, dark eyes scanning the faces of the most prominent men in England.
Beside him, his wife Philippa placed a warm hand on his shoulder in an attempt to comfort him.

A frail-looking, white-haired man with a nose like the beak of an eagle stood,
"Your Majesty, if I may?"

Torah puffed out his chest with pride, using his silk-clad arms to demonstrate as he talked
"We all know that we can't save everyone," he began, watching the faces of his pensive audience, "And the plague is coming, like it or not,"
King Edward tensed some more in his throne.
"I advise that Your Majesty doubles the taxes of the people, make the peasants work twice as hard to produce more grain and-"

A murmur broke out amongst the men

"Let him speak!" the King ordered, effectively hushing the group.

Torah bowed "As I was saying, Your Majesty, we should fill the castle pantries with all the grain we can get, gather as much gold as possible and lock it away in the royal vault. And then we shall gather all our family members, each and every one of us present here, and take refuge within the castle walls until the plague passes"

"That is cruelty at its peak Torah!" cried Sir Henry David. He sprang to his feet, easily crossing the room with three long strides. The knight grabbed the old man by the collar and shook him roughly - as if to shake some compassion into him- till his bones rattled beneath the skin.

A few of the men took Sir Henry's side, raising their voices in argument.

With a dirty look cast at Torah, Sir Henry dropped the small man like a doll.

"Why, pray, should I abandon my subjects Torah?" King Edward eyed the man, not with outrage, but a sort of intrigue.

Torah smiled to himself. He knew it wouldn't take much to convince the King - he was but a weak-minded child.
"My Lord, you cannot protect the whole of England, try as you might. The plague cannot be stopped either. Our best bet is to protect the top officials; the people who make up the framework of our great kingdom. We are England. The peasants can fend for themselves. And when all this is over, we continue leading the subjects who are left."
King Edward looked just about to bow to the pressure so he added "Your intentions are honourable my Lord, but the situation requires a realistic approach. The people love their King and would lay down their lives to protect you. Take their sacrifice. Long live the King!"
"Long live the King!" The group chorused.

Sir Henry David left the assembly raging mad. He was furious at the selfish decision the crown had reached. He got to the courtyard, his mere presence sending some young squires scampering.

Sir Henry was a peer of the realm, a noble knight whose brave deeds had earned him a seat in the King's inner council and the title of 'King's Best Knight'.
He had served the throne of England dutifully for years, so his anger at the wicked decree was understandable.

Over the next few months, the castle workers toiled day and night stuffing and filling the castle pantries with every harvest, every grain, every bottle of wine they could lay their hands on.
The treasurers and tax collectors likewise went door to door, coercing the people to pay five times the normal tax. The people, completely unaware of the coming plague, obeyed the King's orders and had to make ends meet with whatever scraps the Royal family left them.
Sir Henry watched the injustice with fury in his heart and a slowly rising temper.

By the autumn of 1348, the Black Death struck England and the castle gates were immediately sealed.
While the Royal family and the nobles wined and dined in the castle, the people of England were in agony, sick and dying in hundreds.
It was also then that the lack of food truly began to taunt the people. Grown men suffered fainting spells from just breathing too hard, their bodies weak from hunger.
It was a truly wretched time for the Kingdom.

It was also during that period of time that the story of Humpty Dumpty was first told.
The people claimed to see a cloaked faerie man who visited hungry families at night and generously left them gifts of food at their doorsteps. The only evidence that it was the same "faerie" leaving them gifts was his mark which he always left on the parcels used to wrap the food.

It had only taken Sir Henry David two weeks to concoct the brilliant plan to help the people he had sworn to protect.
Under the cover of night, he would sneak into the royal pantry and make away with bags of grain. Then he would slip out of the castle through a secret passageway behind the castle with the stolen grain in tow. Disguised in a dark, hooded cloak, Sir Henry deposited portions of grain at every doorstep he came across. He further used his private seal to imprint on every parcel he delivered, leaving his initials "H.D." on every gift.

In no time at all, rumours began to spread of the "faerie man " named Humpty Dumpty who had been "blessing" the people with food.

Sir Henry continued his secret trips every night, soon going as far as breaking into the royal vault and sharing gold to the people.

So, as the occupants of the castle partied on, the people were having their misery lifted by Humpty Dumpty.

But of course, all secrets can't remain secrets.
Torah, who had been placed in charge of the food had observed a quicker decrease in their stock.
Careful not to create panic in the small society of royals he had masterminded, he chose to lay in wait and observe.

As Sir Henry stole into the pantry that night, burning torch in hand guiding him in the dark, Torah stepped into view.
"Sir Henry? What does a knight of England seek in the royal pantry?"

Sir Henry froze in place, horrified. He quickly dropped the burning torch and turned to flee.

Sir Henry made quick work of the two lanky guards who made to apprehend him as they were no match for the king's best knight.

Upon arriving at the secret passageway, he discovered more guards than he could handle roaming the entrance, all waiting... for him.

The castle was enormous, Sir Henry reasoned, he would hide somewhere inconspicuous until he could sneak out through the passageway.
Mind made up, Sir Henry snuck stealthily to the West Wing of the castle, hiding away at the very top of the West Tower.

Torah called an emergency assembly of the Royal society to share his big discovery.

"But why would Sir Henry go against my orders and betray us?" the King wondered, not willing to believe that his best knight had just committed treason.

"I have heard stories from beyond the walls" Torah began "About a 'faerie man' called Humpty Dumpty. Apparently the alleged magical being visits every night and leaves them gifts of food"

The King furrowed his brows, "So... Sir Henry poses as this Humpty Dumpty to share the castle stock of grain and win the favour of the people?"

It was a lie, Sir Henry only wanted the people fed, but Torah smiled, "Yes my Lord"

Anger descended on the King's features. "Take my best horses and men! Sweep the whole of England until you find that traitor!" he bellowed.

"As your majesty pleases," Torah bowed.

"And Torah? Bring him alive. I'll make a lesson of Humpty Dumpty today," he spat.

By first light the next morning, the King's best horses and men were assembled in the courtyard under the command of Torah. But Torah had a feeling about the castle surroundings.
"I want one last sweep of the castle. Spread out! And search everywhere!"

As the search was ongoing, there was a sudden commotion from the West wing.
"Lord Torah! He's here! In the West Tower," a servant called out to Torah.

From his position in the courtyard, Torah lifted his head and beheld Sir Henry jumping out of the tower window, and landing solidly on the fence which was a good drop below the window.

"Get him! But keep him alive!" he barked, pointing at Sir Henry.

But Sir Henry had began running on the top of the high, narrow wall with quick, agile and graceful leaps and steps which no one dared to follow, fearful of falling. He was the best knight for a reason.
Sir Henry reasoned that if he could get to the East Tower by running on the wall, he could make his escape before anyone would think to arrive- they were all too busy watching his impossible feat.

Before the train of thought could end, something nicked him at the tip of his left ear and flew past, warm blood began trickling down the side of his face.

Someone had shot an arrow at him.

"Do not shoot arrows at him you fools! The King wants him alive!" Torah screamed.

But the harm had been done.
The appearance of the arrow threw him off balance and he tipped forward, missing his step and plummeting a staggering 40ft down outside the castle.

The peasants who had been watching the scene from beyond the walls screamed in terror as they watched a man fall to his death.

Sir Henry crashed into the statue of King Edward III mounted outside the castle, the impact severing his body in two and also shattering the head of the statue.

As Sir Henry twitched and gasped in pain, still dressed in his cloak disguise, his last breaths painfully leaving his punctured lungs, he heard a distinct voice in the crowd. It was a little girl,
"Mamma, it's Humpty Dumpty!" He heard the girl say.

Alot of work was left unfinished, but enough had been done in the short time he had. And so Humpty Dumpty died that day with a smile of satisfaction on his face.

Scribbler's note: A few facts here are historically accurate.  For example, King Edward III was a real person and he was also the sitting king when the black death hit England. He also had a wife who was really named Philippa of Hainault. The part of him being a selfish bastard who locked himself in the castle and left his people to perish was all me of course :) ..... This story was inspired by the nursery rhyme Humpty Dumpty and the Coronavirus pandemic which is similar to the Black Death of the 1300's. What do you think?