SHE IS A MESS BUT A MASTERPIECE

By Olabisi Akinwale 10 months ago 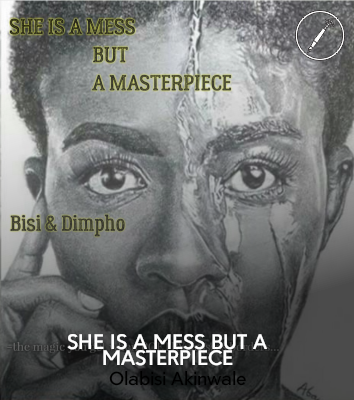 SHE IS A MESS BUT A MASTERPIECE

But her scars are shadess of strength & power,

Staircases of love in the robes of wonders,

& layers of light arraigned on the planks of darkness,

& a rose growing at the bank of blood & sweat.

Sunburnt, yet the beauty sunrises cast(s) on the skins of the oceans.

Through the fire that made her golden...

She walks on unbearable heats & flames of love drips off her skin,

She is power in flames, energy in fireworks,

& her passion stakes at a high price,

Between the night's symphony

She's a lone voice, sitting on the moon's cranium,

Somewhere between the day's memoirs of grey memories

Is her legs dusty with men's brownness,

& her back, hunched against scorching suns & spanking rains.

But, nothing drowns her charms, foil her footprints or mocks her radiance.

Tears bow to her highness in dark spaces,

Conforming to dramatic cases, leading to places with the sun's paralysis,

& she walks through the aches in her heart,

Carries a river of sorrow in her eyes...

She is a mess, a beautiful mess.

Her smiles are veils to the earth's patchiness

With her laughter, a torn world is sewn.

Her arms are asylums to lost kites

With her cuddling, a stolen dream is restored.

Her body is a warehouse of breaks, yet unbroken

With her shape, the world goes round & comes back around.

With her shape the world finds direction & a place to call home.

Her heart, big enough to cover planets beyond the sky with love,

So magical, the galaxies sources passion from her being,

Her wisdom is a sky ever blue & a garden evergreen,

She holds them like an endless rope, reaching the homeless

In acknowledgement of the liveliness from a mother's touch.

A girl on the street of Soweto stumbled on her voice & became a god.

& to be a woman here is to be a victory won against colour.

& to be seen as a black-woman is to break barricades to the blues.

& walk through thin ice looking down on a jungle,

Praising Queen Elizabeth while she queens a better way,

with a lifespan that clutches to eternity.

She is a woman walking in power

& yet a woman sacrificing her power for the earth's riches.

She is a mess, but a masterpiece.

I said this to unfold the pain she conceal in her eyes,

The emptiness she empties in her veins,

The mob in her elegance, threatening to break her bones,

The sadness in the chambers of her cheeks,

The brokenness in the words dripping from her mouth

& the death she hides when she fakes 'i am fine'.

But with the universe dividing her being by zero, she multiplies.

She is a mess, but a masterpiece

I have seen her shiver in pains under the blankets of worries, tears & fears,

She is a flowing river, giving life to aquatics, amphibians...

Reaching their throats with the wealthiness of life,

She gives, gives & gives even when nature turns her back against her beauty.

She is a hot mess

She is a beautiful mess

She is a mess, but a masterpiece.