By Bello Sodeeq 9 months ago 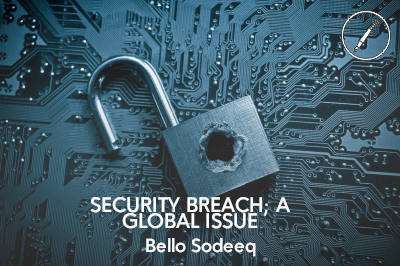 Broadly speaking, the rampaging rise in the occurrence of security breaches in this world is a source of distort for astute humans. The word "security" & "breach" are conjoined to form "security breach".

security is a state of being free from dangers, strikes, afflictions or criminal activities such as terrorism, theft or espionage while a breach is an act of breaking law, agreement or breakthrough of defense. Accordingly, a security breach is an act of attack by a malicious intruder.

What could have been responsible for this alarming rate of security breaches? definitely, there are some factors responsible for this but let us take a look at Nigeria as a case study. Currently, Nigeria has been experiencing an excruciating brutal campaign inflicted by distinguished groups. One of these is the outrageous suicide bombing incurred by the Boko-haram.

The government has got a lot of work to do, reinforcing the military men, providing them arms & ammunitions such as revolver, howitzer, armored tanks, cannons, war aircrafts & other necessary things, so as to suppress the savage escapades of this malicious intruder. Boko-haram has been conducting a campaign of ruin against government institutions especially schools as well as civilian targets. It is noted that one of its tenets is that Western-style education, not based on Quran is sinful & not Islamic.

"They have shared tactics with other Al-Qaeda affiliates in Africa including the Shabab in Somalia & East Africa," An American reporter says.

Other security breachers are the Fulani herdsmen, killing multiple souls, especially farmers and grazing their cultivated land. They have also implanted a smiting uproar in Plateau State, "turning the nation's food basket to carcass casket" (excerpt from This Is Nigeria Anthology). The waywardness of street urchins as added to the uprising of a misled teens, hereby encouraging & contributing to security breaches.

Mobile devices have become a quick ideal entry point for cybercriminals that are also participating in this act. Corruption being felicitated among the citizens has served as a foundation for variable illegal behaviors like burglary, abduction & massacres have played a major role in denting the security of this country.

Security breaching has hastened a large resultant effect on the country and citizens in particular. And the number of breachers is increasing by the day with devastating consequences. This is an indication that the government has to do something controllable about the problem.

The government should halt the act of absconding & looting of money, and provide employment opportunities for graduates, this will help a lot

in solving the catastrophe. Inflation is also a cause of security breaching, multiplying efficiency & reducing the price of commodities will also restrain the country from the act of breaching. Political figures have also been the most rudiment tools when considering security breaching. The government has much work to do in quenching the fervid rage of this atrocity.