Reasons Why Cultism Thrives At The Center Of Excellence

By Kareem Itunu Azeez 15 months ago 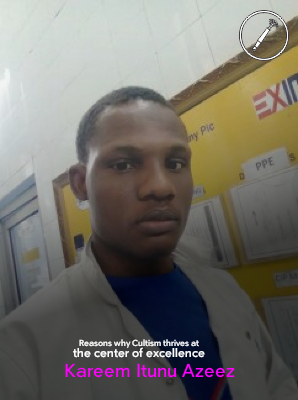 The third worst city to live in, in the world, after Dakar and Damascus, according to the 2018 global livability index as released by The Economic Unit and World Bank, of the cities fit to live in, there were so many bad reasons why Lagos has been adjudged to be among this horrendous statistics of livability, even amidst its robust economic resources and industrial investment far and wide.

It is globally known that security is part of the troubling issues faced even by the most advanced countries in the world, this article, therefore, is challenging and hoping to create the best possible solution to one of the disasters challenging Lagos, in terms of safety of lives and properties, which is further streamlined, to cultism rising at the center of excellence. Lack of access to the social and basic amenities of life, is a known reason why many negative vices crop out of our country, the ever-growing teenagers and youths are challenged to fight for survival, in the deadly midst of penury, But apart of the stifling economic growth, this Lagos youths are more than a willing tool, in the hands of self-centered politicians, who are therefore used to hijack violently the necessary prevalence in the society, however, this only means there may never be a light at the tunnel anytime from now.

Cultism grows every day, but there is a glimmer of hope, even though the high level of poverty will continuously employ more hands idle to the system, who are hungry, homeless, and desperately searching for territories and willing to gain any form of power, of which political power seems the closest, as history seems to narrates. Here, in one of Africa's megacity. The glimmer of hope, therefore, is that there are very much of good people much more than the handfuls of cultists, judging by the Lagos state population.

Delving into the major institutions in Lagos State, which used to harbour more and more, of this community, cultism has always been rooted to tertiary institutions, and although, till current time, they still have their threshold, but just that, reduction has hit their population, but their popularity lingers on, and this time to our streets and walks of life thereon. Some popular cultist stories where, the Badoo, the Black Axe, the black bra ladies, which even reminded me of a research carried out at the United Kingdom, last year, about 30,000 ladies randomly screened, they were already in a group, this further span my narration to Nigeria, and even Lagos where the population is almost twice that of the United Kingdom, and yet structure which aid social life, seems absent.

What then shall the Lagos story be, if such research is been carried out? As we condemned the negative impact of cultism in Lagos, let us not forget the attraction of this wicked act, for example, hunger has been the theme in your apartment at home, and there's this neighbor whose aroma always flows through your nostril, and who also automatically leaves his door open. The truth is, no matter how you scold your children they will always find a way to go play at the neighbor's house. That is just the way cultism attracts its prey.

Everyone born wants to feel important, they also want to be the center of attraction, so they desperately go where they are loved, and unfortunately, they never return. This able youths, talented university dropouts, the innocent and agile secondary school children, divert their energy into negative kinds of stuff, this happens as a result of the absence of recreation centers, parents with no functional relationship with their wards or children, proper education system and teachers who understand the psycho-social factor of a child.

Definitely, these children have every tendency to look into places where they feel important, simply because, everyone born has the tendencies to be gregarious, this is even further flamed with the ever-ballooning population in Lagos. Considering the enabling environment we have in Lagos, it is true that the average earner, the low-level income earners who occupy the ghetto and slums of Lagos, are usually those closest to this kind of tragic occurrences. And this, unfortunately, has traveled so very fast that it has become a mainstay in our tertiary institutions across Nigeria and mostly Lagos.

The government, in theory, keep advising the youths against cultism, and even tertiary institutions with their signboards indicating "Say no to cultism" but in reality have they made provisions on how to eschew cultism? The reason why people create some form of group or the major reason why youths join cult groups is that proper support groups are absent. When I say support group, I mean, Parents, Teachers, and even religious bodies don't have any help available, and then they proceed to where it is available however way or manner, and often times these youths don't know the sad end it entails.

Lagos, Nigeria's center of excellence, now posses various criminal gangs and violent perpetrators, youths dominating about 51%, according to the demographic statistics of the latter part of 2018, it is of critical essence that the state government do something very quickly, to avert the tragic narrative of cultism in Lagos, which has led to different gangs, who steals, rape and commit various atrocities, due to the lack of enterprising structures.

It will be more encouraging if the powerhouses quicky step into the frame and change the game away from their cabal crews. The politicians should stop using thugs to enhance their political ambitions which I coin as selfish interest. This only motivates these helpless and hungry youths towards a demoralizing journey where the state is headed. Lagos as the center of excellence here signifies Nigeria, those who understand know better.