By Raphael Francis 7 months ago 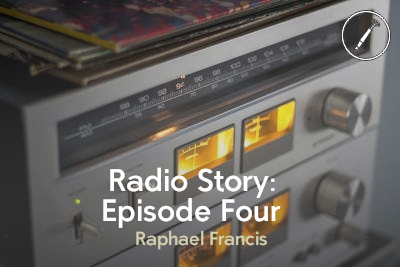 Moments later, after your Bestie had gone, you jump into your bed and cry yourself to sleep. You wake up in the middle of the night quivering and timorous, there's a cradling inside of you, you can't explain, it makes you swoon leaving you hallowed out, ailing and bristling with rage. You Knew you couldn't call your Bestie, so you turn on your radio and a male voice, gruff, flat and husky came on, welcoming you to your favorite program on radio, 'the radio show' and reeling out numbers for the audience to call in and share their stories. 'we'll go for a short commercial break', the presenter said, 'when we come back we shall take one more caller before we call it a day, stay tuned'. It is time to slake the hot coal on your chest, so you dial the number and you come alive.

My name is Raphael, I'm calling from Asokoro

I was ten, with a naive brain wired to believe that blowing my sharpener would make it blunt, and thinking that swallowed udala seed would grow in my stomach. But I was happy, until the night my parents died in an accident, and I discovered that there were more to blunt sharpeners and and swallowed Udala seeds.

He was probably in his forties, with a beard that made him look like a figure from the Bible and always talked about Rome all the time like he was from there. He was my parish priest, a burly man, with an unlined face, who could speak so many foreign languages and never ate anything in the morning except a cup of coffee. He always spoke slowly, carefully, in a way that broke every word into small knots and created extra syllables, as if he was afraid a little speed would suck away meaning from his words. And when he sang, the heavens stood still and listened to his voice stray, most of his homilies were in songs. On weekends, after his routine walk in the fields, admiring the banal landscape, he was a marvel to watch. In a pair of winged tips, suspenders and a thin brimmed fedora, the sleeves of his shirts carefully rolled up, his chest bare. His slender frame morphed into the rhythm of the black and white keys of the piano, as his voice drool over the roof of the house and find its way to me, staring like a naive kid on his first day out to a puppet show. Music seemed to be an antidote to his worries, a way to relax and crowd them out. Somedays, after dinner, when the night is cool and the stars are sprinkled across the sky like a rumor. We talked football; Rome, and his love for Saint Peters Basilica and its famous painted windows; Handels'  Messiah; the day he nearly drowned in the village stream; and how a black man will never be pope. At night, when images of my dead parents haunted me, and I cried, he would take me to his room and put his voice to work and I would fall asleep in his arms. Then one night, after his voice charmed me to sleep, I was awakened by a sudden sting of pain in my anus, I couldn't move my body, Father Paul had gripped me firmly to the bed. Then moments later, after he had finished jerking on my back, he hurried out of the room, panting, like a sprinter who would miss the finishing line. Not minding the eyes of  Jesus that dangles from the slivered cross hung on the wall, peering at him. He avoided my path, even my shadow hunted him and the mere sound of my voice was like a rumble of thunder in his ears. But a week later, he walked into my room and grabbed me, I didn't say a word, I just lay there, sluglike, numb, drooling, unwilling to close my eyes to his shadows cast on the wall, from the dim invading lights sieving in through the window from the moon. He got up and left me in tears. The following day was Sunday, I listened with my head bent, to his homily -  it was about Abraham's faith, his journey to an unknown city, whose maker and builder is God. And as usual, I swung the incenser with a faux smile on my face.

It begins like a whimper, your erratic self had betrayed you, your eyes sting, and you let the tears flow.

'Hello are you there? Raphael! Raphael!' the presenter screams.