POVERTY DIE DIE AND THE ENVY OF RICH FOLKS 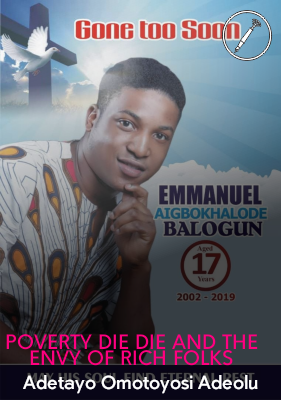 For days now, I have been thinking hard on how the poor people pray daily to escape poverty, spending days, night in the religious center instead of working hard to escape poverty. Their religious leaders have found a crooked means to not only subjugate these downtrodden and helpless people but also exploit them.

Please get it straight that I am not against prayer and holding a conversation with God, but that you can end poverty by prayer only is what I am against. I see lots of poor folks singing the new anthem of the poor "Poverty Die Die" by Olamide. The truly rich people will never sing that song because they know only hard work and smartness can chase poverty away. Not by going on the mountain 24-7.

I read the news of the boy that drown at Dome Hotel, he had gone to the hotel with his friends, but on that night he got drowned without anyone to save him. His trusted friends watched him struggle till he died, without making any frantic effort to save him. They never bothered to raise the alarm.

When they were questioned why they all stood there and never attempted to save the drowning boy, their reply was that the boy is always proud because he is from a rich family and girls always admire him more than them. The drowned boy paid their entry fee into the hotel, bought them drinks and other things and they still watched him die just like that.
After watching the helpless boy drown and satisfied that he was dead, they took his trousers, packed all his money, wrist watch and even wore his shoes.
What kind of evil act is this? This was made available by the C.C.T.V in the hotel. It makes me think that there must be some evil thoughts that go into poor people's minds.

Is it a crime to be from a rich family? These are just young boys between the ages of 17-18 years holding this wicked thoughts which they expressed to the deceased before his death. This mentality, first of all, I say comes from the sermons preached by pastors in which they tell their congregations that they should not go after the things of this world. They make their followers have this thought of hating the rich people for just being rich as if it is now a crime to be rich.

So these folks stop living and start getting comfortable with poverty. Hoping they will be rich when they get to heaven. When a rich man refuses to help them, they automatically label him as 'Evil.'

There is this mentality that poverty inculcates in you as a poor man, boy, girl or woman. Your duty is to guard against it, never you envy or hate the rich folks.
When rich people turn you down in times of need, know that it is not their responsibility to take care of you or even help you. It is your own responsibility to help yourself by making your life count.

Never you hate or Envy The Rich Folks.
You can not get to their position by hating them.

And that is one of the drives that made me create the Boy Child Movement Blog, boys must be taught all these basic ethics, let's show them the right path to successful living without hurting others.

There are so many things you have to crush as a poor boy and that includes the mentality of hating the rich people. By all means never allow that thought take over you, be on guard.

What happened at Dome hotel was a failure of parenting, self-development and the conspiracy of our society.

May the young boy find peace in the afterlife more than he ever knew when he was still here.

LETTERS: TO A GREAT WOMAN OF HONOUR, OGWIJI EHI
Articles
16 months ago
Our Economy : A Crony Capitalism Or Just A Free Market System
Articles
14 months ago
The Finish Is Priceless
Articles
20 months ago
Inspiration Vs Motivation
Articles
5 months ago
Unmasked
Articles
13 months ago
How To Reduce Belly Fat And Stay In Shape
Articles
17 months ago