That Igbo Language Will Not Go Extinct 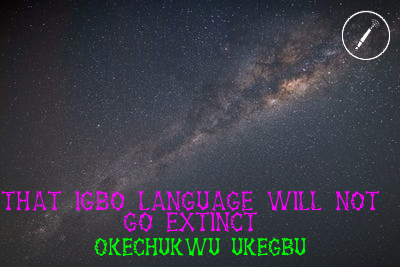 That Igbo language will not go extinct
By Okechukwu Keshi Ukegbu
There have been recent efforts to protect Igbo language fro going extinct.Recent efforts by individuals and organisations to sustain Igbo language is commendable. Such efforts include that Igbo World Union (IWU).The group has strongly emphasized the need to revive Igbo language and its earlier cultural activities.While harping the need for Igbos at home and those in Diaspora, especially parents to cultivate the habit of inculcating in their children Igbo culture and tradition,the group has also succeeded in setting up an Igbo school in South Africa, France, Spain and United States.
The efforts of IWU is not in isolation.It will be recalled that former governor of Anambra State,Peter Obi. Obi introduced far reaching measures to revive Igbo language and culture.The efforts were cash awards to the best three Igbo language students in secondary schools in Nigeria; cash donations as well as university scholarship to the best two Igbo language students in the West African Senior School Certificate Examination (WASSCE), Messrs Kevin Anozie and Chika Echeta, of Holy Child Secondary School, Isuofia and Bishop Onyemelukwe Secondary School, Onitsha respectively.Obi also signed into  law a bill to enforce the speaking and writing of Igbo language among Ndigbo in Anambra and Diaspora, and also stopped meting of corporal punishment to students who speak Igbo in schools in the state.
Obi also strived to make Igbo Language compulsory in all educational institutions in the state, and also sent a bill to that effect to the State House of Assembly as well as making a pass in Igbo Language mandatory for employment in the state. To sustain the renewed interest in Igbo studies,Obi's government commenced the building of Chief Chidozie Ogbalu Igbo Language School at a cost of N50.5 million for specialized and holiday programmes in Igbo.
Intensive efforts are required by Igbo speaking states governors  to revive Igbo language now that the language is among those predicted to go extinct in the near future if nothing drastic is done to promote its usage. Huge funds should be made available to encourage people to study and research Igbo and also a lack of incentive for teachers to specialise in Igbo.
All the government cultural agencies in the Igbo speaking states should be involved in the promotion of Igbo language. Why can’t we use the local languages in our state legislative houses like Lagos State House of Assembly now conducts its business once a week in Yoruba?
According to  research, a child learns better and faster in his indigenous language.Most industrially developed nations reached their technological heights through their local languages. We too can do so by deploying the resources of our local languages to bear on the study of mathematics and the sciences.
There is no cultural feature that is more  peculiar to a people than language. A lost language is a lost culture and identity. Igbo culture is our heritage and pride, and we must strive strongly to protect it from going extinct.