Our Economy : A Crony Capitalism Or Just A Free Market System

By Kareem Itunu Azeez 16 months ago 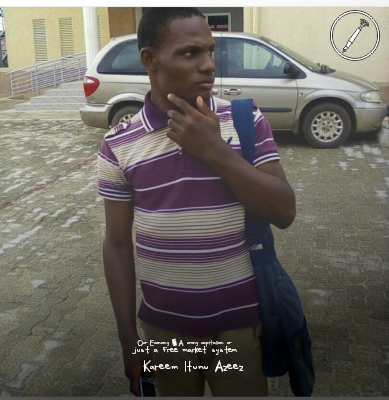 When news was trending about Dangote's latest fit which is in progress,  about building the biggest one man owned refinery,  some Nigerians were happy,  some weren't for reasons best known to them, some were already tagging this business tycoon as a living example of what crony capitalism signifies,  a situation whereby some selected few own majority of the means of production.  They are the modern bourgeois or let's refer to them as the "Economic Cabals" meanwhile some only anticipates for another scarce job opportunities, and we are made to believe that to some largest level,  our oil will be refined and processed here... Dangote continuously make the rounds,  that's a big capitalist, biggest in the whole of Africa, fortunately, a Nigerian.

Like Dangote we also have Mike Adenuga the communications guru, driving also into the oil wells, no point mentioning names as the list is endless.  Then again we now have another set of people...

So like Uber,  we now have Gokada,  men dressed up in kitted safety wears,  daddy at your service,  wherever whenever you feel you need one.  Even though with many disadvantages, being that various motorcycle could easily be picked instead of waiting for one well-branded service provider, but that aside,  the creators are already in business.

Now let me take you down to tertiary institution,  students lately now offer service in the frame of buying things for people, and being paid for it,  stuffs like foods,  clothes,  from one restaurants to another,  all in the same university,  what happen here is, the rich and lazy pay for the needy and active. In the same system.

It's also no longer news that Nigeria has the highest number of university graduates,  working off their field of study in fact,  working outside the education system they spent hundreds of thousands naira on. The case of the chairman of Slot is a good example of what I mean. Let us pause giving examples for now and shed more light into this story.

Until recently,  Nigerians, particularly the once anticipated lazy youths would ordinarily not think outside the box, we are all used to the white collar jobs immediately after convocation, but two to three years ago,  this story has changed.

The recession which hit the economy unaware really brought out the dynamism of the Yoruba phrase,  "Ole nikan lo ba  omo je" translated,  it's only stealing that dents your image as an individual, when talking about survival.

It's highly unfortunate,  that while Donald Trump of America in a recent tweet, congratulating young graduates and encouraging them how best a time it is for them to graduate, telling them it's the best job market ever and hope for a better future already in place.  Now back home,  while the electorate are sharing the country's cake,  and dipping their hands in the cooky-jar with no one to ask for accountability.  The Nigerian graduates are the ones left to motivate themselves into venturing into a world they weren't used to. Now even at convocation centers, you likely will hear the questions, hope the latest graduands perform their entrepreneurship program while in school,  simply because outside there is fiercely competitive.

One thing I am seeking answers for is,  should we say,  this gross joblessness, university graduate, youths super physically fit individuals, young and beautiful women are a plus to the market system or a Disaster in disguise in time to come.

While the country is trekking out of recession gradually,  I mean in theory,  we are not in recession but in reality,  we are deeply in waters of recession,  judging by all magnitude you could use to judge. Then back to my intuition, should we call this latest trend,  of everyone owning a business an era of full capitalism or just some free market system borne out of necessity?  In my questioning and observation,  I came to the conclusion that the last recession Nigerians encountered,  really was the one which recorded the most job loss of all, from all various sectors, banking industry, and even the manufacturing industries also. All these people came down to realize how creative they are and how many businesses they could create out of the necessity to survive. Now that's not a capitalist oriented person,  but a free market-oriented individual who just wants to survive.

Capitalism,  as we know is an economic system based upon private ownership of all properties, including wealth creating assets. Here, the government plays the minor role of maintaining order and regulating relations between economic entities. While a crony system is that where government plays a major role in allocating resources and patronage to preferred or ‘anointed’ business entities, under an overbearing and paternalistic wealth distributing system, Nigeria is a good example,  arguably though. Now lastly of my three concepts,  free market system, The free market is an economic system based on supply and demand with little or no government control. I can furthermore tell you,  While no pure free market economies actually exist, and all markets are in some ways constrained, economists who measure the degree of freedom in markets have found a generally positive relationship between free markets and measures of economic well being. This also tallies with recent developments in Nigeria.

The reality about the Nigeria wealth system is,  while the rich keep getting richer the poor somehow keeps getting poorer,  the north is a very good case study,  many motivational videos audios would blame the graduated youth that money shouldn't be your problem for self-employment and initiation of ideas,  that's one larger than life lies we have been used to all along,  who invest nowadays in your creativity and would your idea just grow wings and become money and financial stability especially when no one knows you,  not even about who you know any more,  because the game has change,  everyone knows someone.

Lekan Sote completely nailed it  in view of his 2017 article, "About Nigeria's Crony Capitalism", he said,  "You should not wonder that Dangote remains the richest black man in the world. He caters to basic, everyday consumer needs of Nigerians, who endure shortage of practically everything. Anyone with a near-exclusive concession to import salt and buy government-owned cement factories cannot but be a beneficiary of crony capitalism." In comparison even to exchange rates,  let me take you back to the current Emir of Kano,  a former president of the Central Bank of Nigeria, Emir Sanusi said that the privileged could sit in their gardens, make phone calls and get foreign exchange delivered to them. The foreign exchange, which may not even be used in importing anything, has a ready market with a huge profit in the multiple exchange rate market. Judging by this evidence,  I ask the question, therefore,  who If not the likes of Dangote could make such phone calls,  and all will continue rosy.  Nevertheless, we must not discredit the enviable role played by the richest black man alive in the area of employment, this is just a comparison of how mission impossible it almost seems for the average to even climb into the top, neutrally with hard work inclusive.

The Nigerian people in my view are purely capitalist and market-oriented by nature, and this is evident by the performance of Nigerians abroad, as well as the resilience of Nigerians to wait for no one. In a country where the government cannot provide basic amenities like adequate water or power supply, education and healthcare services, the average Nigerian is pulling his individual weight to provide these services through the creation of private firms.

I hope the Nigerian government would completely shift away from this crony system to a freer and a more fairer economy where there are equal business opportunities in terms of loans, taxes and other charges, this would only help the Nigerian situation, and aid the population who no longer believe in democracy but only bonded together with the spirit that continuously believe that "HUSTLE MUST PAY".