One With God Falters Not; With Mother Life Is Easy

By Kareem Itunu Azeez 2 months ago 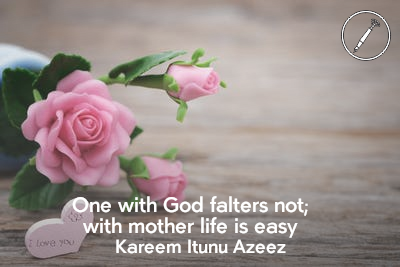 One with God falters not; with mother life's easy

(For my mother a happy birthday)

There is no starting point when I serenade into the ever wonderful world of a mother, then one wonders how the creator came to understand the greatest wonders of the earth is simply the love of a mother.

Fadekemi, clocks another plus, at a time when many celebrates their mother with wishes of "Forever in their hearts", yet Omo na bouncing keeps the momentum birthed out of grace, a grace that transcends human Knowledge, grace from God the Creator.

If in reality they ask me what do we want in replacement of mother, before you crucify me choosing all that I have, I did send away for every minute with mama, would you please dance through time as I makes it as minimal as I can, in love, in truth, in honesty and in sacrifice which even a father cannot give, but only a mother.

Four days before her birthday, she had ask me what I have for her as a gift, I was a bit worried, because financially a student shouldn't be task much, but this is my mother's birthday. Little did I know all she needed was just a heart that appreciates her, that moment, I knew I was wavering away from mothers advice among the various piece she's given me, so what can a man do, than to trace back his steps. So having taught much, I realise that all I can do is to continuously give panegyrics to mama. So I say in behalf of the three wise men you raised, may the sun shine on all you do Mama.

In an age where parenting has become a secondary task, in an age where raising children responsibly has become an Herculean task, I am proud to say I have met mothers who continued to defy the odds, and who prove everything in life is about dedication and determination, and if lists are to be called about such mothers, my mother would definitely be among this people.

Everyone says their mother is the best, there's no argument about that, it all depends on the premium we placed on them, for me, there are no premiums on her, she's just who she is, my transporter to here for some temporary times.

For boys like, who have seen parts of life at a tender age, who have been exposed to the sharp knives of a world where love is lost and often time forgotten, I tell you when you see sons like us, we have a lot to tell you about what it means to be born in a family of two wives, one father, and as at age ten, upwards what it means to see you father at most twice every lucky months. I tell you when you see boys like us, ask us the story of the lucky ones, who aren't left to be catered for by a naked and impoverish world, who against all pain has the soft hands of a mother to raise us, when father has gone in search for a greener pasture that never came, and who unfortunately met his end in this deserted ledge. It hasn't been easy, but one with God falters not, but with mother life is much easier.

Many many years ago, long before I was born, along the farmlands of Osun, down the coastlines  of Ilesha, down there, Mother had been born, as I was born to hear.  in a family beyond nuclear is not as challenging as today, but when its challenge comes,one may wonder why he or she had chosen to make a name in a family where only the brave is recognise, but with a life so short, so brutish and even sometimes nasty.

That's where mother had been born, and at even a very tender age, she had lost her mother, the strongest pillar any child could have. And even till now I wonder how a woman who was never raised in the arms of her mother understand so well the love a child needs, there's a huge difference knowing in theory that mothers should love their child, and actually displaying this love, oh mother, money I do not have but applause you shall receive. There are so many stories that mothers tales is only in series told from a griot son, but for this moment, we are drinking to the joys of been plus one, and no matter how less we blow the noise, one with God falters not, but with mother life is easy.

Growing up as a child, our fortunes were contrasting, while she never had the pleasure of understanding so much of how the love of a mother is, here I am with two others, honored to have this woman as a gift. The best gift anyone could ever be blessed with.  I remember very well, as early as those times, Sundays were the best days of my childhood, not because of anything but that was the best times I spend the better part of a 24hours with mama. Except for days when I am sick, or when my siblings were, some twenty years ago, she had achieved so Much that, if not God and mothers willingness to see through love, where would I be, and where would my siblings be. For one with God falters not, but with a mother life is good

Today, as mother clocks addition in honor and longetivity in good health, your three kids can't thank the maker for so much joy and hope which we have attained, through you, they say a happy child is a reflection of a good home, they never said it's the reflection of a single parent, not even in a world where parenting is becoming a secondary task, yet Dear Mama through the scorn remains.

So much to talk about when I reminisce through time, and now as she enters a new decade, ahead of us as usual and as expected, what is my time without mother, the one who's feet lies my paradise, isn't that a bonus from God the creator to live beyond fears, and when my time here is done, she still would explain how a tough time I had given her growing up. Therefore from this time onwards everyday is a birthday for her, let us continuously cheers to one of earths wonders.

This Beautiful Faces Should Not Fade; For Them Whose Beauty Shone Through Scorn
Diaries
3 weeks ago
Take Solace
Poetry
2 months ago
This LASUSU Candidates; My Expectations And Is That All We Have?
Articles
4 months ago
Boxing: A Death Warrant Or Truly A Sport
Articles
6 months ago
The Tunnel
Poetry
5 months ago
Sometimes In Delta State Polytechnic :Narrations From She Who Never Left Lagos
Articles
9 months ago
Previous Next