One Thing In Common

By Charles Ace 24 months ago 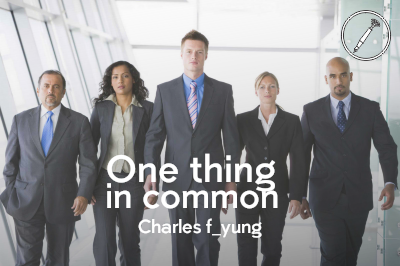 Family, societies and countries all have a peculiar characteristic – one thing in common. It could be the way they dress, the food they eat, the language they speak, their manner of walking and what have you. There is always something that evinces a person of a particular race or religion. That “subtle something”  whatever you wish to call it (I call it a “common” thing) is always evident.

Success -in what ever way you wish to describe it- is born out of a plurality of attributes; a definite chief aim, self-confidence, enthusiasm, perseverance….but just like a car has several concomitants it will never be called a car unless it is able to move. And from what come the energy to propel the car? FEUL. DETERMINATION is that fuel, it is  that energy that propels success. “success Bible” is pervaded with stories of men and women who worked their way  to apogee , through difficulties of diverse nature— indigence, illiteracy e.t.c, but in the midst of all this shortcomings still “made it”. In these stories the attribute , determination, runs like a golden chord. Men and women who had sown the spirit of determination has been able to reap an ample harvest of nature’s reward of success, they had also  bridged the chasm between penury and wealth, mediocrity and greatness.

Determination is that “common thing” am here talking about. It took Walt Disney three years to produce a movie that shot-up the budget 400 percent. In the course of production , those(friends, family and general public) all about, inquired on the expediency of his full-length cartoon movie( Snow White) being generally accepted. The outcome of the movie as we all know it was a stupendous achievement. The story of another prominent success was that of a man who at the tender age of nine lost his mother. He was then assisted by friends who loaned him some money to start up a business which he ran smoothly to the best of his abilities till until after a year when he lost the business, went bankrupt and almost went into oblivion. His chase for public office was supplanted by failure, five consecutive times. The love of his live died even before he could put a ring on her finger. He was nearly down-and-out. At this point anyone in his shoes would have given up, but thanks to the sown seed of determination he was able to fight till he attained his goal. This man was the sixteenth president of the United States of America; Abraham Lincoln. Another personality started life as a pauper. Her mother had her out of wedlock. She was the daughter to a maid whose father was away at war when she was born. She lived with her grandma in penury, wearing clothes made out of potato sacks. He was often sexually abused by her relatives and family friends at the age of nine. Tired of all the abuses she ran away from home, got pregnant with a child who never saw through the first three minutes after its birth. Regardless of the devious start in life she managed to become a millionaire at the age of 32 and today Oprah Winfrey is regarded as one of the richest women of our time.

The stories are endless, “success Bible” has a myriad of them;  napoleon rising from a poverty stricken Corsican life to being the greatest emperor of France ; Ford working as a mechanic to becoming one of the richest man in the world ; napoleon Hill walking out of a coal mine a laborer to becoming one of the greatest writer in the world. In what ever undertaking this men ventured they always had in them a stock of determination.

Determination is the key to success. On that note it seems necessary to add that determination without action is as good as dead.  It seems okay to desire something— say a car, but seating arms folded, “desiring”, will never get that car rolling in your garage.  Go about the pursuit of your dreams with determination with a whole lot of action and certainly , most assuredly, you’ll reach your apogee.