One Ayah Changed My Life

By Muftaudeen Musa 2 weeks ago 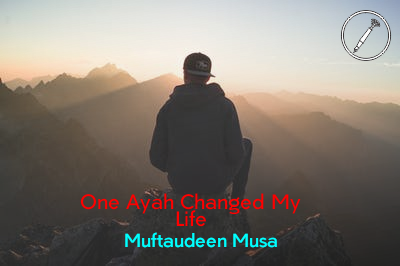 Al-Fudayl ibn ‘Iyaad was famous for his piety and worship, but he was not always a practicing Muslim. In his early years, Al-Fudayl was an infamous highway robber; he would prowl in the night for victims on the road from Abu Ward to Sarakhas. Between these two cities was a small village in which lived a girl that Al-Fudayl was in love with.

One night, out of desperation to be with her, Al-Fudayl climbed the wall of her home. As he was climbing over it, he heard a voice recite: "Has the time not come for those who have believed that their hearts should become humbly submissive at the remembrance of Allah..." Surah Al-Ḥadeed 57, Ayah 16.At that moment, Al-Fudayl answered, "O my Lord, the time has indeed come." He returned from where he came and sought refuge near a travelling party on the main road. They were busy engaging in a serious discussion. Al-Fudayl heard one of them say, "Let us continue our journey now." Another answered, "No, not until the morning, for Al-Fudayl is lurking on the road somewhere out there, just waiting to rob us."Having heard the entire conversation, Al-Fudayl thought to himself,"I go around in the night to sin, while a group of Muslims remains here because they fear me. Indeed I feel that Allah has brought me here to them only so that I can reform my character. O Allah, I indeed repent to you!"

What we can learn from this story is that no matter how sinful a person is, there is always a chance that they may turn back to Allah in repentance. Since we do not know people's futures we should hope for their guidance. Sometimes the worst of people can become the best of people as what happened with many of the companions of the Prophet Muhammad (May the Peace and Blessings of Allah be upon him].