By Adeleye Praise Tobi 15 months ago 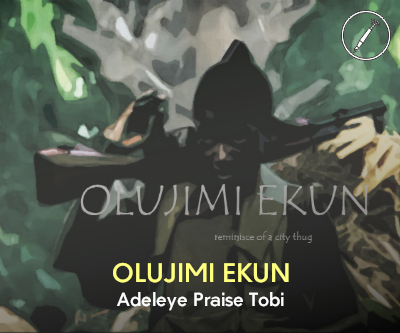 My early conscious years were majorly spent under the Oju-Elegba motor bridge of Lagos State.  I grew up with my mom who was a petty trader.  She had a small tray where she displayed her goods for sale beside the road.  She had biscuits, sweets, chewing gums, toothbrushes, chewing sticks and powdered milk on her tray menu.  Life was very good then when I sit down to reminisce the old days.  The days when there were no worries for school, the days when all I had to do was sit down by my mother to help sell her goods.  The sales we made per day was just enough to feed us and refill stock from the big market not far from us.  Mother made sure I was always well fed.

Those were the days when Iya Risikat’s shop was not far from our house.  My mom would give me a hundred naira every afternoon to go buy food from Iya Risikat.   I usually bought seventy-naira worth of fufu, one piece of meat which was sold for twenty Naira while the ten Naira that remained could buy two sachets of water.  At age six, I was allowed to eat three out of the seven wraps of fufu which was bought.  My mother preferred using egusi soup with her fufu while I preferred Okro soup so at some point she would allow me to get Okro soup with the fufu.  The afternoon meal was usually the best for me.  Both morning and night, we soaked Garri.  Sometimes we drank our Garri with sugar when mother was buoyant.  My mother would eat three wraps too of the remaining fufu and give the remaining wrap to Kehinde, the beggar’s daughter who shared the same space with us.  Only a torn wrapper separated us from Mama Kehinde and her daughter when we slept.  Kehinde was about four years old then.   Her mother was blind and had to beg every day to sustain herself and her daughter.  Mother was usually very kind to Kehinde.  She allowed her to come to our space when we were eating and usually offered her part of the meal.  She also used to occasionally give Kehinde some of the biscuits and sweets that we sold.

Kehinde was my first playmate.  We would roll in the sand, build our dream houses with mud and many times cook imaginary meals with imaginary pots on imaginary stoves.  I remember cuddling tight with my mother on rainy days when everywhere was very cold.  She would wrap me with all her wrappers and still hold me very close.  She seldom cared for herself.  She didn’t mind bearing the whole brunt of the cold inasmuch as I remained warm.  She would buy aboniki balm most times when the weather was chilly and rub my whole body thoroughly before we slept at night.  My body would seem as if it was on fire.  I remember screaming at her once to stop.  She only smiled at me and reassured me it was for my own good.  The only comfort I knew then was the comfort of my mother’s wrappers.  She didn’t have a lot to give me but she gave me the best of all she had.  There were days sales were very low and we had to eat of the goods were supposed to sell.  At other times, kind passersby lent a helping hand to myself and my mother by just dashing out money to us.  This usually happened when a good Samaritan who wanted to help came in the guise of buying what we sold.  They would buy something as small as biscuit worth five or ten Naira and give us denominations as high as five hundred or one thousand naira note.  It had happened about five different times where the strangers told us to keep the change.  They were usually overwhelming moments for my mother and I.  Those were the days we bought powdered milk and chocolate tea as we called it then.  We ate bread those special mornings!  Sometimes, we bought akara and koko.  Koko is watery pap sold alongside akara.  Sometimes, it was moi-moi we felt like eating.  Those nights were unforgettable too.  Mother allowed us to buy suya across the street from Abdullahi the meat merchant.  We practically lived like royalty.  When I think of how little children feel during Christmas, I can almost say that was how I felt when those miraculous donations came in.

The way the cucumber, onions, cabbage and the kulikuli concocted dry pepper that dressed the meat as a garment tasted on my tongue came with the best feel for me as a child.  Only comparable to those moments were festive periods when people around cooked and distributed to the less privileged of which we were big beneficiaries.  That was the only time I got to taste jollof rice and sometimes fried rice.   Those kinds of meals were foreign to us.   It wasn’t usually long before we went back to our early morning garri soaking routine when we had exhausted the free money.  My mother called our good Samaritans Angels.  We were not beggars and my mother emphasized that to my hearing.  She didn’t really like the fact that Mama Kehinde’s had to beg to survive but there was nothing much she could do as the little income she made was barely enough for herself and her child; me.  My mother would rather starve than beg.  I even overheard her one night telling Mama Kehinde how she could help her set up a business if only she could set apart a particular amount from what she made from begging every day for a month.  She was referring to the very same business she was into.  It never worked out though.  Mother always wanted to help others if she could.  She offered to help rub Kehinde with the aboniki balm when it was cold.  She assisted Mama Kehinde in washing their used clothes.  We called them clothes though when I look back now, I can say they were glorified rags.  They had been stitched at almost every point.  Who cared?  Inasmuch as it covered our nakedness.

The bag where I kept my belongings was one of my mother’s wrappers.  I would carefully pack my clothes in it and tie it up.  I had two shirts and two shorts which I alternatively used.  My shorts were very much tight and I had gotten them torn several times due to my playfulness.  Mother had carefully stitched them over and over again.  At some point, she got tired and let me wear them like that.  It wasn’t a bother to me.  Left to me, I would run around town rolling an abandoned car tyre naked.  I referred to the tyre as ‘moto mi’ and guarded it jealously.  I never allowed anyone to play with it except I really liked you and trusted you.  Whenever I saw a strange face approach me for moto mi, I quickly ran to my mother who was the only fortress I knew then.  I had taken notice of the street where the bullies stayed and avoided them like plague.  I had heard stories of little children being dispossessed of their ‘playing materials’ and being beaten when they protested.  I would never allow that happen.  Some of the bad children would ask you nicely and when you allowed them to play once, they would claim ownership and deny ever getting it from you.  That was how Ige lost his kite forever.

Life was sweet for me during my early childhood days when my mother woke me up from sleep chanting her family’s panegyric. She would also do same whenever I was ill and I was refusing to take the herbal concoctions made specially by her.  She knew the use of different leaves for every kind of ailment.  She never subscribed for modern medicine.   She was my doctor.   Mother was actually everything to me. With tears, I remember how she chanted those traditional praises that made my heal swell with pride with her voice like that of a Nightingale.  She would say;

A ma a fa won ya perepere.

To ba gbiyanju re wo,

It was the last part that was usually the most exciting to me.  That was when she called my name.  It was from the last part I gave myself the nickname that I became famous with.  Whenever I called myself “Olujimi ekun”, my mother’s chants would come alive in my heart.  Her voice would resound in my ears.  She gave me a legacy of boldness.  I owe my mother everything.

Meaning of OLUJIMI’S PRAISES sung by his Mother

‘The son of the seven mountains that no wind can overturn

The son of the seven oceans that never runs dry

The son of the Lion that never pays obeisance to an antelope.

Instead, it tears them apart

Oh Mighty Elephant, Where is the creeping plant

That dares confront you when you journey?

No creeping plant can stop you from moving

If it tries to stop you, it will be done for

If it tries to stop you, it will definitely with the Elephant on its journey

Olujimi the tiger, My husband

Seven men in one.

Because you are a Tiger yourself.