Night With The Dead 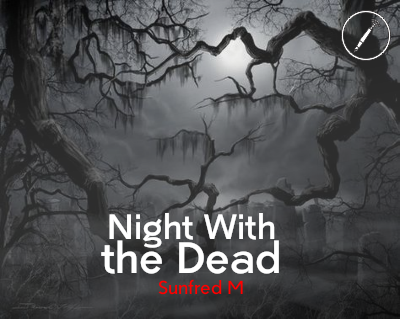 Night With the Dead

When I awoke my ears heard no sound

My body was laying flat on the ground.

Darkness was all I could see

And I couldn’t wiggle free;

From the compressed dwelling I was in.

I wondered what sin

Had led me here;

To a shelter with a roof spilling sand on my face and making me tremble with fear.

The roof was of wood

So was the rest of my new abode.

With every passing second the air became scarce

And my heart began to race.

I banged on the ceiling

Into my mouth, ears and nose.

If I could I would have rose.

I racked my brain for a reason

Of why I am stuck in this suffocating prison.

That is when a thought

Brought back to my conscious all I had forgot.

I owed a huge debt

To a man who had a temper of a shark stuck in a net.

He sent for his goons;

Who had bodies that were as hard as steel spoons.

They brought me to him.

His face was grim;

When he asked for his money.

His face became more gruesome when I told him I don’t even have a penny.

Now I know where my body is laid

Because the last words of this man still ring in my head.

He had stared at me in fury and said,

“For your stupidity boy, you will spend a Night with the Dead.”