By Ojuroungbe Sodiq 7 months ago 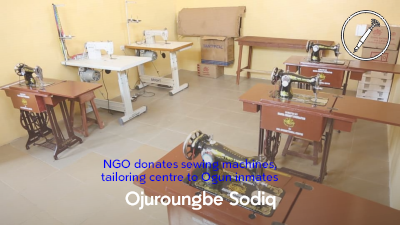 A Non-Governmental Organization, Habiba Charity foundation has donated  seven sewing machines and a tailoring centre for the  inmates of the Oba correctional centre in Abeokuta in  Ogun state.

The foundation also donated a borehole and ultra modern mosque to the juvenile detention center, Borstal institution in Adigbe,Abeokuta .
While handing the tailoring centre and sewing machines to the correctional home to the authority, the Founder of Habiba foundation, Rasheed Sunmola said the gesture was to support the efforts of the government.
He explained that it became imperative to provide a means of livelihood for inmates so that they would not become a threat to the country  after leaving the correctional facility.
Sunmola added that the foundation is concerned  about how they could  reintegrate the inmates back to the society and make them useful for themselves.
He said, "This was done so that we can give our brothers (inmates) here something they would be doing after they leave this place and they will not become a nuisance to the society.
"We are giving them this tailoring centre with some sewing machines  so they can have a means of livelihood.
"We have employed a tutor that would be training them on how to sew cloth and other things that has to do with tailoring.
"We hope they would be ready to grab this opportunity.
"I am assuring  them that anybody who learns  this handiwork well would also get support from our foundation to start up something when the person finally leaves  this place.
"All we are doing is to look for how we would reintegrate them back to the society."
Sumola however called on philanthropists and politicians to support the efforts of the government by giving to the less privilege especially the inmates.
In his remarks, the Deputy Controller in charge of the Oba correctional centre, Shuaib Ayodeji commended the foundation for its continious supports for inmates.
Ayodeji noted that the collaboration with the foundation has brought development to the correctional home.
He submitted that the tailoring facilities would provide the inmates to have something they would be doing after leaving the prison.
He said, "When I came on ground, I met barely nothing, but with my patience and collaboration with different organizations within and outside the state, we have been able to do so many things.
"With one or two machines we are having before now, some of them have shown enthusiasm to learn and I believe with these new machines, we are having a larger population coming to learn and we are happy about this."
In the same vein, the chairman of the day,  Hameed Omotayo charged the inmates to always remember their value when making cloth for customers.
He maintained that the centre is an indicator to the end of poverty for the inmates.