After The Last Supper

By Aniekan Andikan 14 months ago 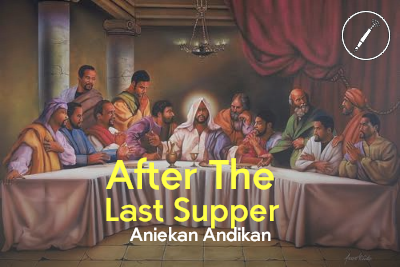 'Hmmmm. This Bros J dey make too much sense sometimes. But this time, he don miss yarn. He don miss yarn well well!' Judas was venting to Peter. 'How can he say na one of us go kpai am?' he continued in a low voice, putting his hand on Peter’s shoulder while leaning towards Peter's left ear.

Peter shrugged him off and turned his back at him. He had no time to exchange banter with the dullard of the group. He was busy scanning the other men in the room, hand on the dagger that was in a sheath by his side under his Kaftan

He was looking out for any sign of apprehension on the faces of the other men. His eyes picked up John and James. They called them the Sons of Thunder. They were the ones who wanted to sit on some thrones with the master. Who knows if their plans had evolved into taking the main guy out so that they could have the whole throne thing to themselves?

He eyed them extensively, looking for clues. Checking to see if the two brothers were whispering conspiratorially or if there was any sign of fearful anticipation. But looking at them, they seemed equally perplexed by what the master had just said so Peter's eyes left them and settled on Andrew.

Andrew was his brother. A good man. They both loved the master. He was sure that his brother would never plot any evil against the master. Not after all the master has done for them and their family. His eyes quickly left his brother and fell on Matthew.

Matthew was the jew man among them. The freaking tax collector. He loved the money. Peter wondered why the master even allowed him to roll with them. This guy could just sell all of them in a minute. Peter eyed him suspiciously as he adjusted his Isiagu and then opened his little book. He was always with a little book, Peter thought. A little book that he wrote his unholy figures in. He observed as Matthew started writing into the book, his expression showed confusion and concern. Peter’s eyes left him and traveled to Bartholomew.

Bartholomew was not to be trusted. He was the last guy to join their clique and he did not know much about him except that he was the guy that made a certain remark about the birthplace of the master. Peter did not dwell much on him. He was a harmless fellow. Peter’s eyes fell on Thomas.

Thomas the sharp guy. Always up to something, not believing in what he did not see. He seemed confused too but Peter was not fooled. He gripped his dagger tightly and focused his attention on Thomas.

He was going to watch him like the eagle on the EFCC logo that can only see criminals in the opposition party.

He realized that Judas was not bothering him again with the silly talk. He turned to look at him, he was not there. He wondered where the clown of the group had gone to on such a night.

'I hope he returns safely' he said to himself and then turned his full, undivided attention to Thomas.