Media And Fight Against Corruption In Nigeria

By Okechukwu Ukegbu 17 months ago 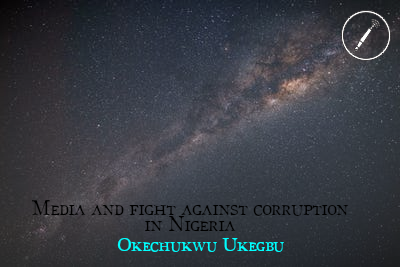 Media and fight against corruption in Nigeria

Undoubtedly, corruption has been the bane of Nigeria’s development for decades now. Both the military and the civilian administrations in this country have not spared efforts to put this monster at bay.

Efforts to rid the country of corruption formed basis of the military coups in the past. One remarkable effort that deserves mention is the reasons advanced by Major Chukwuma Kaduna Nzeogwu in his bid to justify the 15, January, 1966 coup that overthrew the government of First Republic. He said: “Our enemies are the political profiteers, the swindlers, the men in high and low places that seek bribes and demand 10 per cent; those that have corrupted our society and put the Nigerian calendar back by words and deeds.”

Since Nzeogwu rendered this thought-provoking statement, corruption has remained recalcitrant, and could be likened to Wole Soyinka’s ogbanje child – in his epic poem, Abiku – who kept re-incarnating, visiting untold hardship and discomfort to the parents.

Because of the severe consequences of corruption on Nigeria’s image, both locally and internationally, and the negative pressures it is exerting on the nation's economy, subsequent administrations have no option but to design one campaign or the other to fight the malaise. The present administration led by President Muhammadu Buhari is no exception. In the president’s thought, “if the nation does not kill corruption, corruption will kill the nation.”

One tool that has been proved veritable over the years - in the successful mounting of any public campaign - is the mass media. The mass media can be referred as channels of communication through which information, knowledge, ideas, culture, and norms are passed or communicated to a heterogeneous audience that are sparsely distributed and spontaneously receive this message. The mass media can be print, which include newspapers and magazines, among others; or the electronics, which comprises the radio or television. There is also a recent brand of the mass media which is referred to as the new media. The new media, according to Wikipedia.org, refers to content available on demand through the internet, accessible on any digital device, usually containing interactive user-feedback and creative participation. Common examples of new media include websites, such as online newspapers, blogs, wikis, video games and social media. One of the defining characteristics of the channel of mass media is dialogue. The new media transmit content through connection and conversation. It enables people around the world to share, comment on, and discuss a wide variety of topics.

The question that agitates the mind here is: “Why should the mass media be adequately deployed in the current fight against corruption?” The answer is not far-fetched. It is in controvertible that the media play a critical role in a country's development. The media were at the forefront of the struggle for independence across African countries. A typical example is Nigeria, where elder statesman, Dr Nnamdi Azikiwe and other nationalists deployed the media maximally in their struggle for the nation’s independence. Because of the notable roles of the mass media in a nation’s development, a renowned scholar, Edmund Burke, conferred the media with the title of “Fourth Estate of the Realm.” Though not constitutionally guaranteed, the media checkmates other arms of government, such as the executive, legislature, and judiciary. The media is also referred to as the “watchdog” of the society, because it strives as the mirror with which the masses keep a tab on the society, basically the ruling class. Without the media, the society cannot function properly, and anything that affects the media negatively touches the heart of the society.

>It is important to note that the media has made immense inputs in political reforms and nation building. The media has been deployed to effect political changes such as the collapse of Unio of Soviet Socialist Republic (USSR), agitations for political reforms in China and pro-democracy struggles in Nigeria.

>The roles of the media in a ny society cannot be overemphasised. They include carrying of ideas; presenting representative pictures of the society; classifying the values and goals of the society; monitoring the government and making it accountable to the people ; promoting the concept of accountability, integrity, honesty, fairness and equity. Others are giving voice to the voiceless; agenda setting; fostering national unity and integration; promoting society's culture and the moral value systems; and promoting sustainable national interest at all times. It is unambiguous to note here that if the current fight against corruption is to succeed, the media must be deployed effectively.

In addition, for media men to discharge their duties effectively in this current fight against corruption, the media ethics should be upheld religiously. It is an open secret that the ethics of the media of recent have been eroded embarrassingly. Webster New Collegiate Dictionary defines ethics as the discipline that deals with what is good and bad with moral duty and obligation; a set of moral principles and values; the principles of conduct governing an individual or group; and conforming to accepted professional standard of conduct.

The ethics of the media are some principles and codes of conduct that guide the journalist in the discharge of his duties and are as important as inner directives for the individual decision-making in various situations that arise in the course of performing his professional duties.

For the purpose of the current fight against corruption, few ethical codes and conduct should be emphasised. It will be recalled that the press has been seriously lampooned because of the black envelope syndrome. It is generally alleged that this syndrome induces journalists to slant stories in the interest of their benefactors. Though this assertion deserves a thorough argument, it is a known dictum that “he who pays the piper dictates the tune.”

A contradictory argument which tends to support the brown envelope syndrome expresses concern over the conditions of service of media practitioners, especially those in privately-owned establishments. It is no longer news that journalists are owed arrears of salaries, upward of one year, by proprietors of media houses in the country, including the notable. Indeed, bribery (brown envelope) is serious ethical issue of the media and should not be treated with kids’ glove. But to effectively de-emphasise it, media practitioners should be adequately remunerated and their salaries should be paid as at when due. If we achieve this, the fight against corruption would have been substantially achieved. In the words of late Moshood Abiola, publisher of the defunct Concord Newspapers, “if you fail to pay your workers, someone else will pay them and they will work for the person.”

Also, if the current fight against corruption must succeed, journalists should not promote sectional interest. They should see the entire country as their constituency. People who have been previously convicted for corruption should be celebrated on the front pages of newspapers or accord prominence on the electronic media. They should be treated as corrupt persons and not saints, because sometimes whatever the media accords prominence is regarded as serious issues by the public. The media should not promote issues that would affect the psyche of the public negatively. If these codes of conduct are religiously upheld, our current fight against corruption will achieve remarkable victory.

COVID 19 Strengthening Communal Spirit In Times Of Great Need
Articles
4 months ago
The Many Accolades Of Gov Ikpeazu
Articles
5 months ago
Okoroafor And His Entrepreneurial Adventures
Articles
11 months ago
The Passing On Of Another Colossus, Elder Chibueze Monday Nwachukwu (1940-2019)
Articles
10 months ago
As The Church Of God (Seventh Day), Nigeria Inaugurates Its New Leadership
Articles
12 months ago
Dr. Okwuonu, A Nigerian Politician With A Different Political Philosophy
Articles
15 months ago
Previous Next