By Odutayo Tolulope 17 months ago 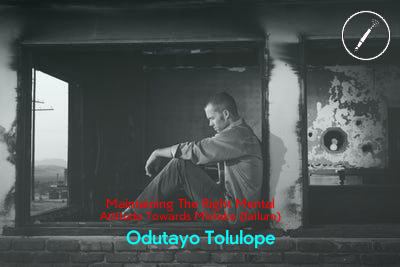 Errors cannot be totally avoided by the human race due to her mortal nature. Errors are part of what make us human, they are like our DNA, because we sometimes do not have control over them.

Errors are not as bad as they seem to be , it is what we do with mistakes made or failures that make or mar us. Our environment has made a big deal out of mistakes made by people. This has made us see failure as "a taboo" and a crime, because people who fall victim of failure get criticised and victimized for failing  instead of getting encouraged.

The fear of not succeeding has made people scared of trying new things, exploring great opportunities, taking that professional course, writing those exams, etc. These people become quitters, modiocres, they never maximize their potentials, they rarely experience happiness and on top of these, they never get fulfilled in life.

They just play it safe, rarely take risks and  all they do is worry about things that might go wrong (despite not having control over such things), they get themselves worked out by focusing on the thousands of reasons not to try instead of channeling such energy on that one reason not to quit. These folks miss out the fun and adventure attached to launching new opportunities.

When we make mistake or fail, it is not the mistake that is the real set back, but our attitude towards such mistakes. How do we react to mistakes made by us? Do we engage in self pity? Do we say why us? Do we worry about what poeple around us will say? Do we give our thoughts so much power over us by letting them get us stucked on a spot?

Mistakes are not so bad as they seem, but what we do with them  determines the situation of things. We become what we think. Things will only get better, that is if we do not give in to self pity and fear. It is only when we move on that solutions and new idea begin to flow in. Do not beat yourself up when you make mistakes, rather, move on!. This provides illumination to dark paths.

When we make mistakes, all we need do is not take ourselves and things too seriously by laughing at ourselves and such situations.

Great inventors such as Abraham Lincoln, Bill Gates, just to mention a few, did not achieve success at their first attempt, they failed repeatedly. But, what makes the difference between these great inventors and a failure is that they allowed their errors to be their driving force towards achieving their goals, they never gave up!.

The beautiful thing about repeated failure is that one derives several and better ways of doing things. I just imagine if these great inventors had quit their dreams, we would not have been priviledged to enjoy the product of their relentless pursuit today (great achievements). We would have been in discomfort today.

When mistakes are made, do not stay there. Move on! It is not the end of you! It is only the beginning of great achievements! Take courage!