By Ugwu Chiamaka(jiaspeaks) 4 weeks ago 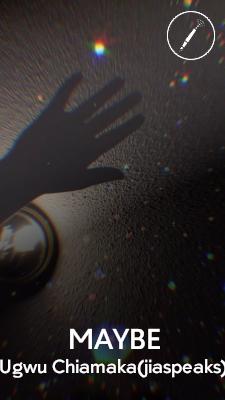 They say things are not always as they seem

Maybe it is true

Because, maybe if things were clear as crystal,

We may not enjoy life as much as we do

Or we may not have wonderful stories to tell.

So maybe, it is right to look at the world from a different angle

And see things a little differently.

So, maybe, that girl, you think is proud, rude and bitchy

Only puts up a tough exterior

For the fear of letting people in

Cuz she's been hurt before

Or maybe she feels so insecure she thinks bitchiness is the best way to mark a superior territory.

Maybe, that lad who is the life of the party

The one who throws every party, brings a barrel of beer

Throws his hands up in the air

Ends up in emptiness

When the party is over

Silence enveloping his entire being.

The one who walks with her head bent, staring into her phone, scrolling through old messages,

Headset plugged deep inside her ears

May not be a snub

Maybe she is afraid

And her space is just safest for her.

That guy who is tagged a Casanova,

Never sticking to a lady,

The one who pushes people away

Maybe he has seen love tear up in his eyes

A fear of commitment, of love

Or maybe he is completely oblivious to what love is.

And that aggressive boy

The one who shouts, yells, punches his fist into a wall

Maybe that is the world he comes from

Maybe that is the way he was raised,

Maybe he is damaged

So maybe the maybes don't matter

Maybe,  that is just how it is.

But maybe it is not

And we could help each other out

Giving a benefit of doubt

Maybe instead of judging, we could  help fix each other

And then maybe, the world would be better