Life And Its Mysteries

By Utibe Dickson 8 months ago 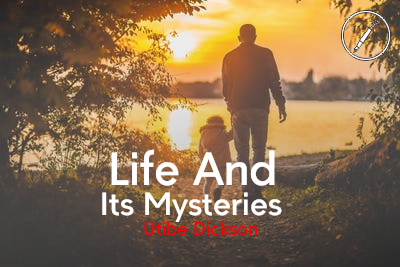 1. THE JOURNEY OF LIFE

Life as generally said is the state of being alive because it is a rhythm which composes itself, to be the source of happiness and sadness. In other words, it is said to be a system which comprises of ideas working together in an arrangement for the perfection of tasks, which is mandated or programmed by the creator.

The Holy Spirit acts as a central processing unit because it is programmed to process the events happening presently at every moment of one’s life. So, therefore, life as a rhythm produces a tune which could be either pleasant or vice versa in various varieties; leading to a decision left to be decided by us, on which tune to dance or listen and the power to decide on what we want in life by processing it.

Knowing already, the Holy Spirit acts as a Computer Processing Unit; it also acts as our teacher because it anoints without measure. In Matthew 11:27, it is written that ‘If we refuse the teachings of the Holy Spirit the father and son won’t reveal himself except we listen...For without the holy spirit, we null and void, just an empty vessel as said in John 14:17. Life is structurally designed for mankind, it has been improved in various sectors for the mindset of mankind. For him to think positive, and as being directed in such a way to neglect wrong deeds and thought, produced from the mind.

…Life being an object or warehouse for various opportunities...brings ‘bout success at every step taken...

The problem we have is that we don’t appreciate the events taking place in and around the environment we live in. The only thing which allows the functions of the body features, to work in the right proportion; is because of the element called “Air”. It is said to be the “Fuel of life” and the reason for its existence, and this is due to the influence of the word called “IGNORANCE”.

The word “Ignorance” has being disease that has blindfolded the life of our present youth, causing them to make stupid decision because they never had a better understanding, of what they are about to do or the decision they are about to take, causing them to do reckless things that would tarnish the image of their bright future all because of this word “Ignorance”. Ignorance has led a lot of youth; down the wrong path bring about a shortage in their lifespan because they refused to learn because they believed that, they are always right. There’s nothing wrong in being right, but all we need is just the physical guidance (which is our parents) and spiritual guidance (which is the Holy Spirit) in everything we do; because God compared to a poet and artist, has drawn, design and written our life in plain sheet and modified it in a way that pleases him. But Ignorance stained the picture with atrocities such as greed, hatred and other manners of events taking place in this modern life. For the most dangerous thing that could ever happen to a man, is when he fails to know who he is. And this is happening because we lack the vision and lost focus of the future ahead of us. So, therefore, we have to deprive ourselves of ignorance by standing our ground against it.

The second major problem, which has also affected, not only the youth but also every being in this life is “GREED”. The question is: what is greed, how did it come to existence seeing the controversy surrounding this term, I’ve concluded that: Greed is an intense, selfish and inordinate desire to possess something beyond our territory. Things like wealth, goods and objects of abstract values to keep within our reach.

The name “Greed” has taken over the life of God’s people because they want to be gods of themselves, not minding the consequence attached to it, and this has blindfolded them, causing them to reason foolishly thereby generating problems for themselves and generations to come because of their insatiable desire.

In Nigeria today, we see politicians sit on the position given to them by the people, for them to meet and manage the state and country’s funds. But instead, they use that influence to oppress the lower class citizens of the country and even going to the extent of stealing the country’s funds by laundering it on things or values that would benefit them and not the country, causing instability, unbalanced crisis in the country’s economy thereby creating a major havoc (problem) for its citizen.

These positions were given to them to help upgrade the economy, and to bring substantial solutions towards the country’s challenges. But greed has shadowed their thought and these have led to corruption in the country, because of their insatiable desire and lack of content.

Then the third major problem which has also affected us, preventing a clear vision of the future is:” PROCRASTINATION”. Procrastinating as an act, is the putting off, delaying or deferring an event to a later time. In other words, it is the practice of carrying out less urgent tasks in preference to more important and sophisticated things. It is procrastination that deprives us of many opportunities in life, because when we hear of its existence e.g. Job opportunities, it is either we complain or do irrelevant things, causing us to do things at the wrong time.

Procrastination has made, we youth to do things that are less beneficial to our lives. Instead of, fighting for what would be of benefit to our life. Like fighting our way through schools so to obtain a substantial knowledge from education, but we procrastinate by feeling less concerned about the issue regarding the future of our lives, allowing arrogance to set in. By hanging out with friends that would negatively influence our well-being, because the only thing you would get from them is “Popularity” for example:

Being most notorious person in school, because we joined a wrong organization forgetting that every event that takes place in our life has a reward and this procrastinating act or spirit has remained a stigma in the life of youth and teens of the 21st century and this creates an unbalanced situation in the country and the world as a whole.

Youths rely on friends, keeps bad companies that ruin career all because of what Popularity, not knowing it comes with a price tag which is lack of peace, generation of greed and curse, urge for power.

Allowing them to be vulnerable to social attacks, which I call “Infinite elasticity of suffering” because of their stubbornness. And note that: “If we think, setting our goals for the future is less important, we should remember someone else is ever ready set it for in a hard way”. Therefore, the ball is our court.

Thinking big is not called pride but the thought of one ‘self is known as pride as written in the scripture-1 Corinthians.9:24-25. As considered that: “Procrastination is thief to vision and focus”.

The earlier we adjust our ways, the better for us; for to avert these problems, we need to avoid these stigmas because it secures success. For every progress is either automatic or inevitable, and for every step towards the goals of success requires time, sacrifice and a passionate dedication to things that are beneficial to us. And note that:” For us to be free is not merely to cast off one’s chains but to live in a way that respects; gratitude would enhance the freedom others”.

Meaning, we should live an exemplary life for others to follow and to be noted as a role model to enhance positive changes in their life. Keep aiming yourself to being the best you can be, all it needs is sacrifice and pursuit. For there is no gain in this world if we are not willing to inflict pain on ourselves because it is a life’s bargain which is “NO PAIN, NO GAIN”.Because of the pain of preparation for our upcoming challenges will determine the gain of celebration for the results. So, therefore, paying the price of intense studying, strict attentiveness, dedication, and hard work would bring about proclaimed success. So, therefore, setting this goal should be our greatest priority and focus, because there is certainty of a great and splendid future; and all it requires is training.

“There is nothing training can’t do; nothing is above its reach because it can turn bad morals to good; it can destroy bad principles thereby creating better ones, it can lift men to being Angels”- Mark twain.

In Matthew 23:12- It is written that whosoever shall exalt himself shall be abased, and he that humbles himself shall be exalted...also in Proverbs 15:33-that the fear of the Lord is the instrument for wisdom and before honor, comes humility. And finally Proverbs 16:8-which states that, a man’s heart devises his ways, but the Lord directs his steps.

“Nothing splendid has ever been achieved except, by those who believed that something inside of them is superior to circumstances surrounding them.—Brace Barton.

Finally, we should commit our work to God, because he is the one who has the final word; as said in Proverbs 16:3- “Commit thy works, unto the Lord and thy thoughts shall be established”…

True Focus: A Pathway To Success
Articles
8 months ago
Previous Next