By Eti Best Herbert 3 weeks ago 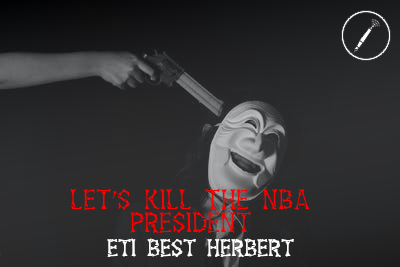 “The first thing we do, let’s kill all the lawyers”.

The above Shakespearean line is often quoted out of context to mean that Lawyers are the major problem of the society that needs to be exterminated in order to have a better society. However, when interpreted in the context of its usage in the Shakespearean play, one would see that the statement means the exact opposite of what it is wrongly perceived to be. In the play, Jack Cade and his ruffians were scheming on their grand rebellious plot to ascend the English throne through extra-judicial means. Dick, ‘the Butcher’, a man of mean character, then suggested that the first course of action is for them to “kill all the lawyers”. Dick seems to have recognised the position of lawyers as the guardians of the truth, rule of law, justice and order in the society. Hence, in order for their plot to succeed, lawyers must be taken out of the way. This would suggest that, a society where there is no lawyer is a surest home of chaos and tyranny.

Lawyers are not professionals that should be loved by everybody. God forbid that a lawyer should be loved by everybody. However, it is desirable that a lawyer should be loved by ‘good people’; while ‘bad people’ should wish all lawyers dead so that there would be no one to oppose their perpetration of evil. The big question is: who would want to kill all the lawyers? It is that person without regard for the rule of law and due process; it is that person that would want to rule by force or through the barrel of the gun; it is the one who wants to bridle the Press; it is the strong who would want to lord their might over the right of the weak in the society; it is the one who, being positioned to manage our commonwealth, plunders it for personal gains; it is the one who is lifted up to the watchtower, only to slumber instead of performing his duty of protection of lives and property. This category of persons would certainly wish all lawyers dead, if lawyers live up to the true meaning of their calling as worshipers in the hallowed temple of justice. Whereas lawyers fail to live up to that expectation, these ‘bad people’ would certainly make lawyers their friends.

In the Nigerian context, the Nigerian Bar Association (NBA) is a representation of “all the lawyers”. It is in view of the burdensome role of lawyers in the society that the forebears of the (NBA), the umbrella professional body of lawyers in Nigeria, penned down the motto of NBA to be: “Promoting the rule of law”. Other ideals of the NBA include: protection of human rights and good governance in Nigeria. It is on this chariot that the NBA has rode on to attain Observer Status at the African Commission on Human and People’s Rights. These are foremost ideals of the NBA which put the country and humanity even ahead of the needs of the individual members of the Bar. In the early days, the NBA had acted as the guardian of these ideals in the Nigerian society, especially during the dark days of military hegemony.

The NBA once had a voice that made persons in the positions of authority to circumspectly watch their steps. That same voice acted as a soothing balm and source of succour for the oppressed in the Nigerian society. However, the sad reality of today is that the NBA has lost the sting in its voice; it can neither bark nor bite. ‘Bad people’ no longer want to kill NBA, because they can easily make NBA their friends and, against godly desires, their collaborators. If you ask Wole Soyinka, he would tell you that the man has died in NBA because it can no longer speak in the face of dark clouds of tyranny, terror, brigandage and prebendalism that have besieged Nigeria in her recent history.

As the leader of the Bar, The NBA President has the onerous task of taking the Bar back to the ancient landmark of our forebears. Recent attempts to give us a “brave new bar” only turned out to be Dutch courage after the hang-over was over. They said they would “put you first”, but you came last behind Warri. Here again, we have another opportunity to choose those who would lead us to the Promise Land. We need a Bar president that is ready to say: “We have come to see how the rule of law works here”. In choosing our new leaders, we should not focus on the candidate with the best promise of welfare packages for members. Remember, NBA is not a trade union. Let us raise our bar to the mark of our high calling. When rule of law pervade the Nigerian polity, the system would work. When there is rule of law, the legal profession becomes secured. When the system works there would be enough job with better welfare packages for everyone, including lawyers. We need an NBA President that would become a nightmare for ‘bad people’. We need an NBA President that is ready to put his life on the line in order to see the rule of law entrenched in Nigeria. We need an NBA President that would make ‘bad people’ say: ‘Let’s kill the NBA President’.

Vote fairly and wisely. May the best (wo)man win.