By Eti Best Herbert 13 months ago 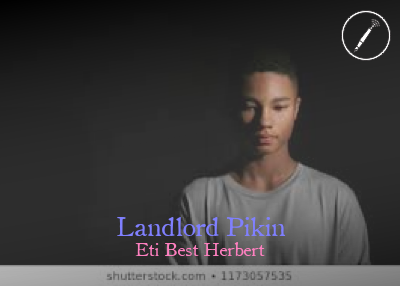 Gbaaaauuuun! That was the sound Timi heard. It sounded like the siren of the ambulance of the University Teaching Hospital on emergency duty. The sound re-echoed from somewhere inside his head. “When you go home tell your mama to give you PHENSIC!” Those were the statement that followed the hard knock that landed on Timi’s head. Timi almost heard himself repeating the same words. He has heard it on many occasions; he knew it by heart; it is a mocking cliché of torment for him. He managed to squat down with his hand holding his head as his frail body could no longer carry his head that was now heavier than a bag of cement. His tiny hands could hardly hold his head together. After what appears to be eternity, Timi stood up to face his assailant, with his hand still trying to hold his head in placed.

“Bobo, what have I done to you?” he found himself saying.

“What didn’t you do to me?” Bobo retorted in his royal haughtiness.

“Is it because you be Landlord Pikin?” Timi struggled to coordinate his language.

“And sooo… what can you do about that?” Bobo replied with impunity. With that, he bounced along in agile gait as his two kick-side friends struggled to match up with his pace.

Timi stood there in bewilderment and utter shock. The other children started gathering around him as soon as they were sure the coast was clear.

“Did you offend him?” One of them asked.

“I didn’t do anything to him. I was here minding my business when he came from nowhere to give me a knock on the head,” he replied.

“Sorry”. “Sorry”. “Don’t mind him”. “That’s how he behaves”. Those were the voices Timi heard all coming at once from his teaming sympathisers. He could feel hot fluid streaming down his left check. He quickly wiped it with the collar of his shirt. He had vowed never again to shed tears for Bobo, the official bully of the neighbourhood. But the outpouring of sympathy from his friends seems to have softened him. They too had at one time or the other been victims of the bully’s cruelty. This was a convention of losers. However, Timi felt he was the biggest looser of them all as he was the usual pick of the bully’s brutality. Sometimes, Timi had every reason to blame himself for his ordeal. Who would see the shape of his head and not feel like knocking or smacking it? He knew for sure that he has a terrible head. His classmates often make jest of him. His head is reputed for holding the highest record of nicknames. The nickname that really stuck was “Headward”, which is an abridged version for “wayward head”. On one occasion while reading his social studies text book, he had stumbled on the map of Africa. He noticed that the map of Africa fits a perfect description of his head. He quickly closed his book and hoped none of his classmates would make the same observation else the list of his nickname would just be on the increase. From then on, Timi had resolved that he would start wearing cap like Banky-W as soon as he was done with his secondary school studies.

Every child in the neighbourhood knew Bobo and his capabilities. He is the children’s nightmare. He is slightly older than Timi and his mates, maybe by two or three years. Bobo looks over grown and bigger than most fifteen years children would be. Bobo is an over pampered son of Chief Philip Akajiaku, the Landlord of one third of the flats in Akajiaku Estate. It took twelve years of marriage before his wife could conceive a child. When Bobo was born the feast that followed remained unequalled in the estate till date. The story has it that during the naming ceremony, Chief Akajiaku had vowed that he can give an eye for his only son. Bobo grew up to be a spoilt brat that always gets his way with his parents. They were always ready to do whatever he asked of them. On one occasion, Bobo had tried to bully Samuel, a new kid on the block. Samuel withstood him to the face. The following day Samuel’s parents received a notice to quit their rented flat from the landlord with a total refund of the rent they had paid. The rumour also has it that Bobo instigated his father to evacuate them.

Timi went home that evening feeling severe headache. He refused to disclose his ordeal to anybody. His parents were surprised at his unusual quietness that night. All entreaties by his parents to make him speak up did not succeed. After taking his meal, he sneaked into his mother room and took out a pain relief drugs from his mother’s first aid box. As a son of a nurse, he knew the combination of drugs to take for minor ailments. As he was about to swallow the drugs, he suddenly thought otherwise. He felt it was a defeatist and weak sign to take drugs for the bully’s blow. He was determined to fight back mentally. With that, he put the drugs back in place and went to sleep in his room.

Timi had difficulties rolling in his sleep. He felt ridged between the wall at his right hand side and another heavy hedge on his left hand side. He woke up only to discover another person on the bed with him, snoring heavily. He was surprised. He was sure he slept alone on that bed last night. Who could this be? His curiosity got the better of him as he groped in the dark in search of his rechargeable lamp. He found it on the table. He flashed the light on the figure lying on his bed. On recognising the identity of the person, the lamp fell off his hand to the floor. The snoring stopped and Bobo rolled to the other side of the bed and continued his snoring.

How did he get here? What is he doing here? Several other questions ran through his mind. He couldn’t find answers for any of them. After catching his breath Timi started thinking of the possible things he could do as reprisal for all the atrocities he had suffered from this bully. When he managed to pick his lamp up, all he could do was to look at the bully with disgust and all the hatred in his heart. Even in his own house, his own bed, the bully was still pushing him to the wall. It’s like there is nothing like home advantage against this bully. He advised himself not to do anything that would make Bobo wake up. Maybe he should do something to make sure the bully does not wake up again. Several episodes of his secret favourite television series, “Hundred Ways to Kill a Man”, which had been banned by his very religious parents, started to replay in his mind. An idea came to his mind. He stretched for his pillow, passed it across Bobo’s face and placed it forcefully on the ground. He has decided to sleep on the floor till morning, by which time his mother have some explanation to make.

Timi woke up later than usual. He couldn’t find Bobo on his bed. He made for his bathroom to urinate when he discovered that the door to the bathroom was locked from inside. “Oh, not again!” he said in frustration. He couldn’t take this anymore. He ran to look for his mother.

As he approached the door to his mother’s room, he heard voices from inside the room. It was the voice of his mother and one other person whom he perceived to be a woman. He decided to eavesdrop on the women’s conversation. As the conversation progressed he deduced that the other woman was Madam Akajiaku, Bobo’s mother. The woman told Timi’s mother stories of how Chief Akajiaku stumbled on some medical records that she concealed from him for about past fifteen years. The record reveals that Bobo was adopted by Madam Akajiaku. Her supposed pregnancy of Bobo came out as still born. She feared the worst that could happen if her husband returned from his business trip to hear the sad news. She knew how happy her pregnancy had made her husband. She quickly made an arrangement with one of her friend to assist her adopt a baby- Bobo. She had been guarding this secret very jealously for the past fifteen years until last night when, due to one act of carelessness, Chief stumbled on the records. Chief felt heartbroken and was enraged in anger. He became violent and pounced on his wife. He battered her severely. Her cries reverberated throughout the neighbourhood. It took the timely intervention of some of his tenants who forcefully opened their landlord’s door to rescue the poor woman. Akajiaku vowed that nothing on earth would make the woman and his bastard son continually live in his house beyond that moment. Timi’s father who was one of the men that carried out the rescue mission, brought Bobo and his mother to spend the night in their house that night. Timi’s mother gave the woman some first aid treatment for the injury she sustained from the battery.

Timi has heard enough already. He changed his mind from entering his mother’s room. Instead, he diverted to the sitting room to wait for them. So Bobo was not Landlord Pikin after all? He thought. Few minutes later, both women walked in. Madam Akajiaku had a white bandage tied around her head. He greeted both women as they sat down. They spent the next fifteen minutes in silent before Bobo walked in fully dressed up, as he rolled a luggage along. He appeared humble and timid. His head was faced downward as he avoided meeting Timi’s gaze.

“Bobo, are you set?” His mother asked.

“Mama Timi, we have to go now. Thank you for everything,” she said tearfully as they made to take their leave.

“It’s okay, ma. Stop crying, everything would be alright. And don’t forget to take your drugs,” she advised.

This prompted Madam Akajiaku to make a frantic search for her drugs. “I seem to have forgotten it in the room,” she said.