LIFE AFTER SCHOOL IN SOME PART OF AFRICA

By Ogwo Charles 17 months ago 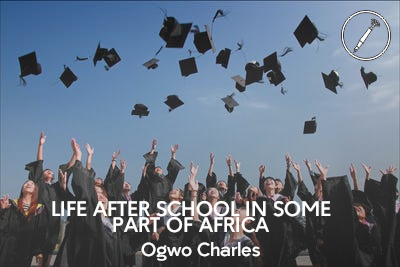 LIFE AFTER COLLEGE IN SOME PART OF AFRICA Unlike the westerner where students who have just finished college immediately joins the higher school in continuation of their academic pursuit, even the cost of education is amounted to scholarship. Students are lectured and workshops are done. Practicals are well elaborated to the student and more importantly comfortability mattered most to the school management for a productive learning. Except for what the students have been provided with for their academic system and scheme, the assurance of a better tomorrow after school awaits them. Consequently making them productive to the society at large. Indeed education is the pride of the westerner. Since education have been introduced to some parts of Africa by western countries in the late 80s and was left under the management of the melanin men during the 90s things where going progressively in the educational system, although not valued by the anachronistics but then education was given a befitting reward to its scholars who persevered with good grades. During this period, Francis Beacon's quote of "Knowledge is power" was the slogan and pride of educationists. Scholars knew what they have acquired, understood them, defended them and consequently were celebrated for it. But today in the contest of this contemporary melanin men in some part of Africa, education seems to have lost its standard and priority in our society, scholars and educationists are now mockery of the people. They have lost their prestige for what they have suffered and preserved to learn, all to find out that the offices reserved for them have been subjugated by those who knows nothing about it. Offices which should be a befitting reward for the scholars have today been occurred by visionless personnels. In the former ye... read more