By John Chizoba Vincent 9 months ago 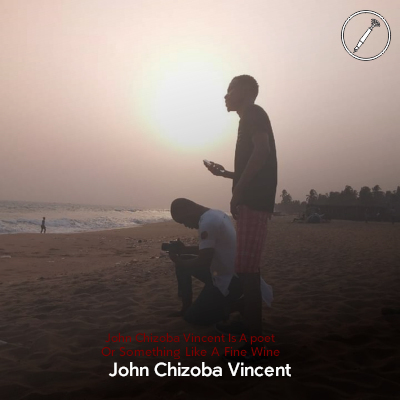 I have learnt how to die a long time ago but death is so boring. I have learnt how to deprave myself of many things to remain the kind of person heaven may be pleased with. I never knew salvation scream also learning from the ways the stars bleed. Sometimes I smell fears but I’m precious to the core longing for a home on the other side of the street where humans can empty themselves and still fetch the water of sanity among their dreams, a true man to Africanism. Here lies the testimony of a boy whose veneration of godliness remained unsheltered by the wages between the thighs of the day light. Not even the noon knows how to pattern emotions or feelings into life. This is what I made yesterday to be, holding hope and dreams. Holding what innate fate deposited in the covenant of who I am. I made myself a god, an honourable knight of worship. I made me a poem; I made me a pavement decorated by love and aspiration on the altar where love lines crossed path, I made me a sun of a half dream. I understand that all our lives are in danger, the storm comes and return back, the big fish eats the little fishes but I keep paddling amidst the storm. I’m an African who perfected the act of waging war between modernity and inherited traditional culture. They have not broken my spirit against what my ancestors built.

How do you kill a dead man? How do you burn his remains without breaking the cord of his troubled ghost? A very small man can cast very large shadows. Power resides where men believe it resides, a shadow on the wall, gutless men in power to conquer the Africanism and Africanists but we accept to conquer self, unless there is a change in the drive of the seasonal atmosphere, power still resides above all men; traditionally, let no man think himself brave. Shadows don’t live in the dark and Africa is light and her children are the light of the world.

However, the poetry part of me governs the principles through which the earth devoted its knowledge into me.  The moon, the ideology of knowing

self cannot be overemphasis from the fact that the existence of me is the reason why many destinies live. I made me a part of godliness to overshadow beliefs and cultures of humanity, to champion the course of what the world could not give to many. And I felt the urge to say that man is holding back the essence of living to his capacity and abilities. The potentials, the portrait of me knowing myself as a man still over rule many other things. I may be the man of your dreams, I may be the demon in your nightmare, I may be the next man standing in between your depression and aspiration; I may not have you tell another about me but the knowledge tailored in the given evolution of our existence is channelled between knowing myself and what I stand to give to mankind. When the colour of our minds is designed to have rainbows of wildfire, the generation of men to come harbour lexical passion into unity, this is Africa.

John Vincent is a poet or something like a refined wine, an apple plucked for the future generation of creative minds. A man housed as a precious stone in the house of symbols. I don’t know how the praise singers table their song to the flowering image of a man but losing the temper of our journey can knit the sagging mind of tomorrow into a promising venture. I may love to tell you that the extent to which you think of achieving a designed goal can be a desired hope to which you can know you. It’ll pass. It’ll pass through my pains, through those things governing the way I live, I can’t be you, you can’t be me but we can actively build our tents together on the castle of time keep humanity going.

When the evening comes with hassle and fine tale of moon light to render telegraph of the kingdom in the bodies of the oceans, burnt men shall uphold a scene of enquiries. They would ask why their bodies were left to rot in the open place to play a game of sorrow...