JUSTICE (Tales Of A Widow)

By Goodness Daniels 15 months ago 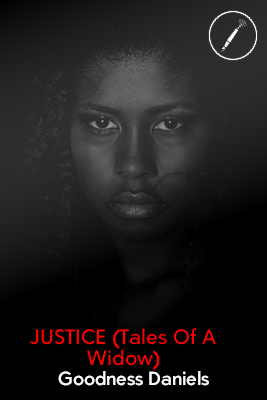 In the days when I was in vernal bloom,
When I was the balm that soothed the worries of a thousand admirers,
The oil that oiled the skull of a throng of lovers,
The pride of my parents.

In the days when my tits were still firm,
And my buttcheeks hadn't sagged,
And the wrinkles at the outer corner of my eyes weren't as conspicuous as it is now,
And the lines on my forehead weren't as marked out as the Ibadan express road as now.

In the days when the windows were still gleaming,
And the heroes hadn't fallen off the building,
And the doors could still pick up whisperings.

In those days when I was a paradigm of beauty,
A svelte,
The envy of maidens,
The topic of conversation of the elderly men,
The pride of well-meaning old women,
The joy of grannies.

In those days when the crux of spinsterhood,
Was a peek into womanhood,
In those days,I won the admiration of all.

One day a travelling salesman came home after many years of being away,
His intent was to get a wife;so they say,
Many information he did get,
Many recommendations he did get.
And so having gotten sufficient information and direction,
He came to our abode-his destination.

His father was a title man of no mean repute,
His mother a trader whose honesty was irrefutable,
His family's chronicle unquestionable..

He was given a seat,
All the processes and conditions, he did meet,
All was set and done in a few weeks,
We were now qualified to become one,
We were set to begin our journey of love..

My new home was just like the other one,
Except for the other one I would say it's second to none,
Anything I wanted at a snap was mine,
I walked freely and ate and dine,

But just when spring was in sight,
Sunshine was caught up by darkness,
Darkness struck like thunderbolt,
Wiping away every trace  of serenity,
Death's approach was so terrible,
Vile and cruel in all its entirety.

Death,like tomorrow a faceless stranger,
Swept everything in its fury and anger,
What is left to live for?
For I still have swevens of horror.

I have been robbed of attaining motherhood,
I've only tasted bits of womanhood,
Am in upgraded spinsterhood..
Now am long in the tooth,will I ever be pacified?

For I keep hearing the cries of unborn babies,
Babies eager to suckle on this golden breasts,
Babies denied an entrance into reality,
To have a taste of mortality,
Who will be my judge?
Will I find truth and sincerity?

Perhaps..
For my Lord was a loyal breast,
No wonder he stirred up hate in the hearts of con beasts.

Am on my way to meet justice,
For am told to he can help me find his twin justice,
That he can end the miseries I've endured in long silence.

Here am I waiting for justice,
Calling him to judge with his conscience.

Here am I entreating justice,
To plead my case.

Here am I calling on justice,
To hark my cries and wails.

Here am I making a request to justice,
To select to man my case truthful juries.

Here am I in front of justice,
Supplicating. That he be the judge and I the plaintiff,
To free me from my vicious captive.

Here am I beckoning on justice,
To stop the menace,in the dock,
To also mind the ticking of the clock.

Here am I prompting justice,
To expose wolves in cloaks,
Parading as saints.

Here am I imploring on justice,
To judge injustice,
And stop unjustice.

Here am I trusting justice,
That he pronounce the  condemn sentence.