In Nigeria, To Go To School Is To Make It In Life

By Aniebiet Effiong 7 months ago 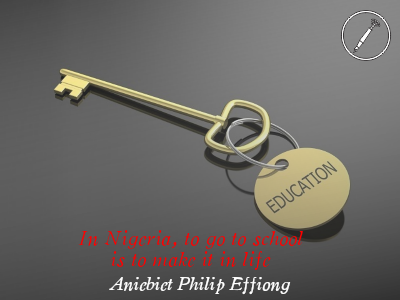 This topic may sound scamming, false and annoying to the hearing of a hustling Nigerian graduate who became Peter, toiling all night since graduation. If your reasoning has always been in line with this topic, then some adjustments have to be made. Moreso, this topic is not JUST to grab your attention into reading the work but, to call your attention to the obsolete mentality that has made us remain unprogressive; retarding our progress.

Going to school here in Nigeria is not a guarantee to making it in life. It is not an assurance to living a good life. If it was, that was then, not now. If it was, that was when Nigeria was sound and hearty. That was when the Nigerian system was working. As for now, the educational system of Nigeria is in a sickbed. Same as Nigeria is. Nothing is working. I know as a Patriotic citizen you will oppose this, but, opposing this won't stop it from being the truth.

This work is not a leeway to dumbness, as I know Nigeria isn't interested in the soundness of anyone.

Firstly, gaining admission into a school in Nigeria is by grace and not by qualification. I reiterate, gaining admission into a higher institution in Nigeria is by grace, not by qualification. And, I suppose this to be a soft reminder because I wouldn't think there could be a Nigerian who never knew this seeming fact. If you don't have God's grace, then you should have money grace. Nothing works by merit here.

Nigeria is unconcerned about your education; Nigeria kicks your education at foot, Nigeria spits at your education, they shun it. A big man's son will not sit with you in your unventilated, creepy lecture hall to receive lecture. No, they won't. They are all outside the country, schooling. Wealthy Nigerians send their wards to Ghana or where they choose, less wealthy ones enroll theirs in private schools while the poor - the majority of the country's population - send theirs to public schools (government schools). You see why Nigeria doesn't care for your education, and will never care? They rather allocate billions of naira for our Pastors and Imams to regularise their trip and visit to Israel than care for your education. More reasons we find illiterates in public offices who can't construct a good sentence; who will throw you into cell for doing nothing - after all they don't know what your law says; who is after their monthly salary.

In Nigeria, the high rate of unemployment has made it convincing enough that tertiary education is a big scam.

The other day I posted on my social media wall that, 'going to school (Tertiary institution in Nigeria) only makes one poorer', no one seemed to have accepted that. I was heavily attacked for what I knew was the truth. I have seen lots of people finding their way into the higher institution, spending everything, selling out what they had for fees and textbooks, so they could make it in school, only to graduate into begging. You may seem not to understand what I'm insinuating. Let's get it right, you gain admission to study physics for four years, you spend your four years reading, memorizing, cramming, writing exams, buying what the school says, then graduating to find nothing doing. How poorer have you become?

The truth is, we had lost the meaning of education the day we mistook school for education; the day we started believing that a man without a degree isn't educated, the day we thought that going to school means being educated. Forget the tense 'thought', because we are still thinking the same way. Unsurprisingly, this familiar thought has been on default settings in our heads.  Going to school is one thing, being educated is another in its entirety. One can have one and remain devoid of the other, rarely, one can possess the both.

"It is one thousand times better to have common sense without school than go to school without common sense" Collins Oscar, Idiots with B.sc.

To go to school here in Nigeria isn't an assurance to living a good life. Living a good life here implies earning a living as a result of the school you attended. Nigeria doesn't promise you a job after school. If you've ever had this ideology of being employed immediately after graduation, discard it. It was the society within you who created that thought. Maybe it worked then. But now, the more graduates we have, the more the unemployment rate increases; the more graduates we have, the more the poor people. Its partly not our fault that some of us abandoned the path(our potentials, callings in life) that would have made us great only to go to school to obtain a degree. We decided going to school because; the society said we can't succeed in life without going to school, because the society would frown at us for not going to school, because the society wouldn't respect us for not answering 'graduate' as a success title.

"School is good but it's not for everyone. If you have a calling in any area of life (if you are good at anything), follow it. If you couldn't write, read, nor speak well whilst in primary and secondary school, then it is needless attending higher institution because you'll still come out a schooled illiterate". Things get worse when people like these graduate from school get into the world.

Before I conclude, since it has become more glaring that Nigeria isn't concerned about your education (school like you would have it), it is advisable that we all find a way out. Since Nigeria hasn't promised anyone job after schooling in their school, let us arise and find something doing because failure to do so, beggars will keep increasing. The rate of hunger-stricken people will keep increasing. Hunger in the stomach doesn't affect the illiterates alone, it extends to the literates. Even affects the lazy literates who are waiting for a job from the sick Nigeria.

Lastly, educate yourself, equip yourself, build yourself do same to your children against the endangering arrows of poverty Nigeria is shooting daily aiming at you. School alone isn't enough. Know this that, it is harmful to tell your children that the ONLY way of succeeding in life is by going to school. Let them know that schooling here is by choice. By this way they won't feel frustrated if they find nothing doing after school, they won't commit suicide when they finally realize that education is not the key to success in Nigeria. Just let them know that, here, the schooled suffer, the unschooled suffer. Maybe everything shall be okay when Nigeria recovers from its sickness.