Ileya: Beyond Meat, A Symbol Of Justice And Equality

By RIDWAN SULAIMAN ADESHINA 3 weeks ago 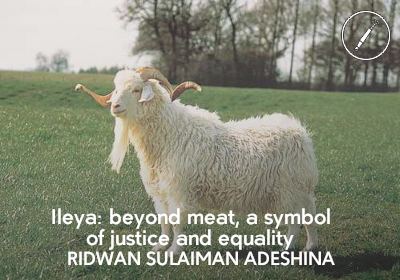 With zero sentiments and fanatic, no event in the whole world brings people together like the Muslims' Ileya festival. This is the only period in 12 months where people travel thousands of miles home without thinking of cost and risk involved. This is the only time where people see it reasonable to take their wives and children to their family house(s). The only time in a year to strengthen family bonds, to share love, make corrections and for restitution.

The significance and importance of Ileya can not be overlooked, especially by our religious leaders and young ones who only get to meet their brothers from other parts of the state on that wonderful day. People of other faiths also participate in this festival because of its historical background.

This is the only period where people from all over the world travel to a city called Mecca for religious rituals. It cost many Nigerians thousands of Naira yet we don't mind. I have once heard of one man who processed his Visa and ticket with over a million and he was happy that he made it.

We were told by religious leaders that there's no difference between human beings in heaven except those that will go to hellfire (may we not be among). I think everyone has to look at the level of equality being observed every year in that place (Mecca). Whether you are the president of a country, senator or whatever status you might be or the official post you hold. Either you are white or black or whatever your skin looks like, you will be among those people, ordinarily, you will not want to be with, in your country. And all of you in the same clothing, saying the same words, and doing the same thing at the same time. Just like Heaven on earth.

The equality, justice, friendship, relationship, worship and sacrifices being observed in this place every year is second to none. The world would have been better if this is only what our religious leaders preach and if we followers adhere strictly by it.

Perpetrators of evil and terrorists have no defense in the Quran and Hadith. They are cursed people.

Among the justice, relationship, worship and sacrifices being strengthen on this day is the sharing of foods to the needy, poor and neighbors. I hope this continues after sallah for a better world.