By Oladoyin Micheal 11 months ago 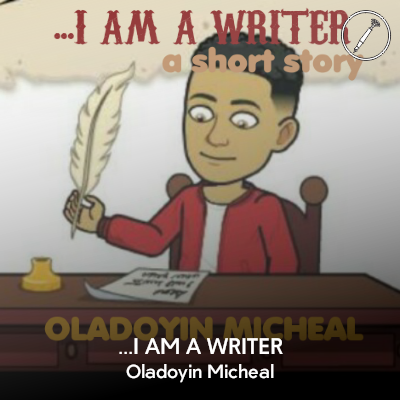 I AM A WRITER

The day had really been a bad one for Femi; he woke up running from the Fulani herdsmen racing after him with weaponry of American-dreamed future arms. He looked at the wall clock in his 4ft by 4ft room and it read 5:30 am, he had only thirty minutes to dress up in order not to get caught up in the morning traffic. He hurried to the bathroom and came out with jets of water racing towards his protruded six packs, perhaps running to take cover from the wiping arms of his silky towel.

‘Thank God I got here just in time,’ he said as he alighted from the cab he boarded to his place of work, his statement is however justified ironically as a Toyota Camry took that time to run into a pothole well-blessed with tea. It had rained cat and dog the previous night manifesting doom of the biblical house built on ordinary sand on some roadside containers at Jericho area of Ibadan.

‘What the hell!’ he cried as the colorful water splashed on his laptop bag. Nevertheless, he walked into the publishing house while cleaning his bag with a handkerchief. The publishing house was one of the best in the country, it was well-known to have published the works of the likes of Chinua Achebe, Wole Soyinka, Christopher Okigbo, and Gabriel Okara among others, it has sections which include the printing section, typing section, proofreading section and Editing/writing section where Femi is working as an Editor. He entered only to be welcomed by a chubby ebony lady with well-positioned dimples.

‘Good morning Miss Deborah, how was your night?’

‘Fine. Your HOD said you should see him before starting any work this morning,’ she answered with a smile, her dimple making him forget all the troubles he had earlier.

In an office painted cream and brown, a bookshelf was at the western region as opposed to the eastern region which has two cushions and a table; obviously for visitors. Femi was on one of the chairs staring at his laptop full of thought. ‘Edit this flash fiction,’ his HOD had instructed him while giving him the flash drive containing the file. Editing a literary piece was not a new task to Femi, in fact, it was the best job he loved to do but something seemed to be wrong somewhere.

‘Why am I given this job at this particular time? The characters in this piece are nothing but live representation of the dream I had last night,’ he thought. He had dreamt of being hunted after writing an action thriller on the massacre planted and irrigated by the insurgents in the country, the insurgents in their communication to the government have threatened to silence him for revealing their secretive modus operandi in his acclaimed-fictional work.

‘I was almost killed,’ he said softly to himself and was shocked to see his HOD staring at him suspiciously. He had only edited the work halfway before the man who also happens to be his adviser cleared his throat.

‘Young man, you can continue the work in your office’

‘And could you please deliver this bundle to Dr. Femi Ipadeola at The Polytechnic Ibadan’

‘Good! You can go in my car,’ he replied and gave him his car key.

Getting to The Polytechnic Ibadan wasn’t a hard thing for him as he had once visited a friend some years back but getting to the Faculty of Business and communication studies (FBCS) building became a herculean task, as regards the direction given to him by a student at the south region of the institution he was to ask for the way that leads to FBCS from anybody at the middle belt region. If only he knew the horrible disaster ogling at him from afar.

‘Hello ladies,’ he greeted two ladies discussing by the roadside as he rolled down the glass. They, however, started to walk away from him. Having overcome the shock, he sighted another set of female students through the side mirror of the car, he alighted and repositioned his laptop which was about to fall on the front seat of the car. ‘Hello,’ he beckoned to them as they approach his car, all of a sudden the ladies broke into frantic race shouting ‘e gba wa o’ Helps us o!’.

He got confused and at the same time angry for the meaningless drama happening, he, however, opened his mouth ajar as the luminous revelation hit him; he had alighted from a car which happens to be a Benz having a laptop inside. ‘They must’ve thought I am a…’ he reasoned halfway and decided to clear up all suspicion.

‘Hello! Hey! I’m not a pant criminal, I am only a writer! Hey! Hello! I am just…’ he kept shouting till he lost the sight of the Nigeria female Usain Bolts walking away from him.