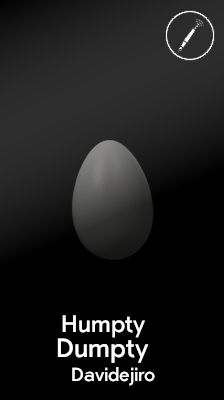 The eggs hit her with the force of bullets from a machine gun..

Buh she has a thick skin and she is used to this..

Sticks and stones may break her bones but eggs can't hurt her. What actually hurt her was that perfectly good eggs are wasted. The foodie in her cries to the heavens for retribution..

She just smiles and walks it off.

She was a young girl,

Not too good looking,

To say the truth,she was a little too round, too round to be considered cute..

And let's not forget her silly gait that makes her look like she has a hunchback or a camels hump,earning her the name humpty Dumpty.

She was teased again and again

As long as he never made fun of her

As long as he was always sweet to her.

She could take all the insults, everything these vicious little kids could throw at her..she had a thick skin and an elastic heart.

She was taught at Sunday school that all men were fearfully and Wonderfully made,he was definitely a prime example. While she on the other hand,she was more fearfully and drunkenly made with excess clay by a spiteful creator with a dank sense of humor.but she was okay..as long as her reverse "beauty and the beast" romance came to fruition.

"Today is the day. The day I wear my love on my sleeve and come clean to him. I hope I don't scare him away"

She gave herself her peptalk for the 15th time that fateful morning. She finally gathered up her courage though it strained and crumbled beneath her weight.she walked slowly towards his house,giving herself ample time to turn back. She got there,a little surprised that she hadn't seen her tormentors. She knocked,no answer,she tried the door. It opened. She walked in,as silently as a rhino can. "hello!!,hello!!, anyone home" ,she called out as she walked towards the living room. She heard a voice,his voice,her heart jumped up into her head, beating in irregular geriatric rhythms. She was about to call it quits when she heard another voice,then another and it sounded like the little kids that torment her. She listened, she wished she didn't. She heard,she really wished she didn't.

"Take the eggs from the shed behind the house,and make sure no one knows it came from me and make sure you get Humpty real good..I'm counting on you guys"he said. "sure boss,have we let you down befo...." she was out of there before they could finish.she was confused, "how,how,why", she had never cried when she was egged,when she was shamed and called names but she cried now.

She sought solace at her favorite place,the high crumbling wall beside the king's home. The kings were a nice family but without children, Maybe that's why they were a nice family. Children are little vicious animals. She climbed up the wall and sat,crying soundlessly. Mr Rodney king came out of the house "hey there Judith,who got you all messed up,is it them kids,come down let me fix you a nice jelly sandwich and you can tell me about it" he called up to her. She looked down at him like she was in a trance but she wasn't seeing Mr Rodney,she was seeing HIM.

"Come down, Judith. Come on,I'm freezing my nuts out here" he called again.

She snapped out of her trance.she stilled her resolve, she had mad her choice.

Mr King,a doctor,rushed her to the hospital, knowing fully well that there was nothing to save. He and his nurses tried all they could to fix her. They tried in vain.

"For Humpty Dumpty sat on the wall

Humpty Dumpty had a great fall

All the king's horses

And all the king's men